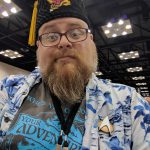 Tomorrow’s the big day, isn’t it? I mean, sure, tonight is the kick off on Georgia Street, with the beer and the music, and gamers are already descending upon our city, filling bars and hotel lobbies with pick-up games. Myself, I’m at work today, then getting settled in and ready for the con tonight, so Lizz and I can pick up our badges tomorrow morning, and get rolling!

Now, it’s not often I go into Gen Con with a plan. Normally, I just wander the dealers/exhibit hall, play some games, and get distracted by friends. This year, however, I have some shows to catch, some items to track down in the dealer’s room, and all that fun stuff! Now, remember, I’m not a hard-core gamer. My board game collection is rather small, and I’d much rather pick up stuff from a local game shop, then lug a bunch of stuff around Gen Con. However, there is still commerce I would like to engage in!

So, what am I looking for?

What else am I looking to do?

So, what other stuff should Lizz and I be looking into? Let us know, and we’ll research it tonight!

See you at the con!
Tony