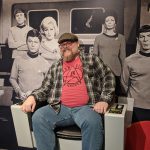 Hey there, my friends. It’s been a while.

With the exception of the latest You’re Gonna Love This… or Not… podcast, there hasn’t been much going on here since things started getting cancelled due to everything happening. I mean, sure, I’ve got Geeking@Home Con going on here on the site, but that’s updated pages, and not really new “content.” However, building has been on hold as I tear down, clean up, and rebuild the Ender 3, because just like any piece of machinery, it needs maintenance. Also, to be honest? I’ve not been doing great, as I spend all day on the computer doing my job, then cook dinner and spend time with the family in the evening, staring at the TV or our phones. I haven’t left the Geek Cave property since the 15th of March for any reason, including essential trips, and that, combined with missing my friends, has gotten to me.

Last week, as I was looking over Twitch streaming information for my day job, I realized I had a way to break out of the rut. I have a Twitch channel of my own, that I’ve used in the past for streaming podcast editing, and chatting with people. In fact, back at the beginning of the Stay At Home Order That Nobody Pays Attention To, I was going to stream regularly, but I ran out of stuff to edit after one evening. With no podcasts to edit, currently, I was at a loss. I want to do something with it, but what?

Well, my blog computer is a Republic of Gamers laptop, for crying out loud. During Extra Life last fall, I was able to stream a couple of games, so I figured I’d go that path. I put a survey up on Twitter this past Friday, giving a choice between three games for me to start out with. Mass Effect (which I played through a few years ago and I’ve been meaning to play again), Fallout 3 (which I’ve played through a few times, and can always play again), and Star Wars The Force Unleashed Sith Edition (which I know nothing about, but I have available thanks to a Humble Bundle). The first two were games I was familiar with (so I’d just be focusing on learning a computer control scheme, and not a new game to boot), and the third would be a new experience (because I am a fool that decides to give people the choice to give him a 100% new experience).

At midnight last night, I took a look at the survey results (did I mention I’ve also had problems sleeping?), and both Mass Effect and Fallout 3 were tied  at 43.3% each, which has led me to a choice.

Well, here’s what I’m going to do.

Starting tomorrow, Tuesday, April 28th, I’m going to be playing Fallout 3, from the very beginning, until I complete the game. I’m going to play it every Tuesday and Thursday from 8:00 PM Eastern until 10:00 PM Eastern, or when I find a good save point thereabouts. I’m not going to switch between games, because I’m already getting used to one control scheme, and I don’t want to confuse myself by trying to learn TWO different ones, especially at my advancing age. Then, once I’m done with Fallout 3, I’m going to bounce over to Mass Effect, and play my way through Mass Effect, Mass Effect 2, Mass Effect 3, and Mass Effect Andromeda. This will be enough to keep me going for a while.

Why am I jumping into the Twitch streaming game so late? Well, two reasons.

First, I’ve been bemoaning the fact that I haven’t played any games in a good long while. If I say I’m streaming it, and I set a schedule, it gives me an excuse to do something fun under the guise of work. I’m not going to be uber professional. If I hit Affiliate status, it’ll be because it happens, not because I’m trying, or anything like that. *laughs*

Second, I’m hoping friends of mine will tune in, give me grief over my noobishness, and chat with me so I’m not feeling as alone. I love spending time with my partner and her daughter, and I call people often, but I still miss my  friends.

So please, feel free to tune in, and follow along as I try to figure out how to use a mouse and keyboard to play video games!

I’ll hopefully see you all online tomorrow at 8 PM!