Though it is long passed, Gen Con ’18 memories remain, and I am finally here to give you mine. Hey, better late than never, right? This year was an unfortunately different year for Lizz and I, as it fell a month after we got hit, and we still weren’t, hell still AREN’T, 100%. So, we didn’t see nearly as much as in previous years, there were no scheduled interviews due to the fact we couldn’t guarantee that we’d make the scheduled time, and we did more panels than previous years, because it gave us the opportunity to sit and not maneuver the crowds with a wheelchair. However, we still had a pretty good time, and we got some stuff worth getting the press badges for.

First, as I do every year, I’m going to let you know what Gen Con brought to our fine city. First, while they didn’t provide turn-style numbers in the press release this year, they are saying they had “substantially more than 60,000 unique attendees” at the show. In addition, they raised “more than $50,000” for Second Helpings and The Jack Vasel Memorial Fund, the 2018 charity partners. You could tell they had a lot of people downtown for the event, just based on lines on Thursday and Friday.

Sadly, Thursday was not meant to happen for us. Lizz had a doctor’s appointment, which meant we didn’t get downtown until later in the morning. By that point, every place I could think of to park was full. Every parking garage. Every surface lot. In addition, the line for Will Call was outside the building, and stretching down West St. to the railroad tracks, as shown in my crude photo below: 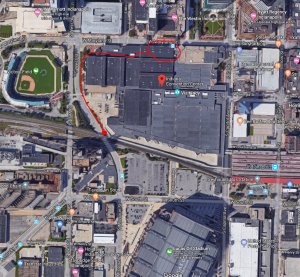 The circle is will call. The red line is the line. The dot is the end of the line. Click for a larger image.

Normally, this wouldn’t be a big deal. However, with Lizz in a wheelchair, and myself still nursing some cracked ribs, it was just not feasible for us to find parking over a mile away and walk, and it wasn’t worth the struggle with public transportation, or Lyft, to get down there and back for badges, passes, and tickets to two panels. So, Lizz and I spent the day doing something else, went home, got to bed early, and were up early enough to get parking on Friday and Saturday.

Friday morning was spent doing what we would normally be doing on Thursday, getting our passes and tickets. We were an hour early for the press room to open, but despite being the first people there, we had some folks ignore us and push in as soon as the doors opened, but hey, I guess they’re just that important. A bit on the press room, by the way, for those who don’t know. Normally, you go in, get your badges, and then you can use it throughout the weekend if you need a WiFi signal, a bottle of water, or the like. This year, some companies had their games set up along one wall, so you could take your time, get a good look at them, find out where the company was, and go to them with good questions about their product. While we couldn’t take advantage of that this year, with our limitations, it’s something I hope they continue to do, as it will help immensely with questions on the floor.

Once we received our badges, we had to go down to Will Call to get our event tickets, which still had an insanely long line. Luckily, as we passed a volunteer who saw us with the wheelchair, we were told there was a separate pick-up location for those who needed to, well, not stand with a wheelchair, and we doubled back to that line. This was a much quicker route, though it didn’t have it’s own queue space, and felt quite disorganized when you got more than three people in the line. Still, this being Gen Con and all, everybody in line was communicating and trying to help each other out, so it wasn’t too bad.

Once we were set, we started getting the lay of the land, and headed over to our first panel, which was “Puppet Building Pro Secrets” over at the Marriott. First off, it is NOT easy to get over there from the convention center when you’re pushing a wheelchair. My fez is off to all of you who have to do this all of the time. However, we did get there in plenty of time to catch the panel, and we were able to get an aisle seat for Lizz. Gordon Smuder of the Puppet Forge in Minnesota (Link) gave a really cool panel talking about making puppets, including information on using the Project Puppet patterns I’ve had in my possession for a few years now. He had samples of various foams and fabrics used in the creation of puppets, and after the panel, at his table on the Vendor Hall floor, he had extra information for those wanting to follow the patterns. It was a really interesting panel, and I’m looking forward to looking for into this panel track on my next visit to Gen Con.

Afterwards, Lizz went to play the Doctor Who RPG with friends who had an extra event ticket, and I warily went to talk to some friends in the Vendor Hall. I spent some time talking with the aforementioned Gordon Smuder about making puppets, and getting some extra reading material. I talked with Fez-o-Rama about the possibility of a Geeking fez, and caught up with a few friends who hadn’t seen me since we got hit. Afterwards, I went and retrieved Lizz from the game, hit the vendor floor again to pick up our sets of Gen Con 2018 dice, then met friends for dinner, before heading back to the Geek Cave, exhausted.

Tomorrow, as if you haven’t waited long enough for this, I’ll post about what we did on Saturday, along with my thoughts about the con this year. Until then, here are some pics I took on Friday, mainly pertaining to the puppet panel!

I’ll see you all tomorrow for part two!

Note: Geeking in Indiana was able to attend Gen Con 2018 due to press passed provided by the convention. These gave us access to the convention, just like a standard 4-day pass, and access to the press room, but nothing else. All event tickets were purchased by the blog, and all opinions are our own.