Dungeons & Dragons Fans Called to ‘Unearth the Deception’ in 2015

January 20, 2015 – Renton, WA – Today, Wizards of the Coast announced the newest Dungeons & Dragons storyline and accompanying product offerings for both digital and tabletop RPG players. Coming off of the biggest and most exciting year yet for Dungeons & Dragons, the Elemental Evilstoryline starts in March and runs through mid-summer. During that time, heroes are needed in the Forgotten Realms to discover and defeat secret cults that threaten to annihilate the Sword Coast by harnessing the powers of the elements of fire, water, air, and earth.

The product line-up includes the release of a new downloadable module—Neverwinter: Elemental Evil—for the highly acclaimed free-to-play Dungeons & Dragons MMORPG from Cryptic Studios and Perfect World Entertainment. Serving as an additional way for fans to experience the storyline, Neverwinter: Elemental Evil brings a new playable class—the Paladin—and increases the game’s level cap to 70. Neverwinter is set in the Forgotten Realms, and the new expansion launches in early 2015. Cryptic also recently announced Neverwinter on Xbox One will be available in early 2015 as well. 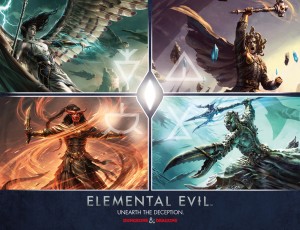 About Wizards of the Coast

Wizards of the Coast LLC, a subsidiary of Hasbro, Inc. (NASDAQ:HAS), is the leader in entertaining the lifestyle gamer. Wizards’ players and fans are members of a global community bound together by their love of both digital gaming and in-person play. The company brings to market a range of gaming experiences under powerful brand names such as MAGIC: THE GATHERING and DUNGEONS & DRAGONS. Wizards is also a publisher of fantasy series fiction with numerous New York Times best-sellers. For more information about our world renowned brands, visit the Wizards of the Coast Web site at www.wizards.com.

This is a press release, provided by Wizards of the Coast. All words are theirs, I’m just spreading the word because I know I have many readers who are into gaming.