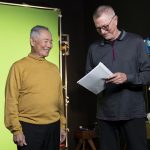 At the end of October, I was super psyched to help announce that the first stop for the “Star Trek: Exploring New Worlds” travelling exhibit was going to be at the Children’s Museum of Indianapolis (link)! Well, since this is only ONE MONTH AWAY, and since today is National Science Fiction Day, then I’ve got a treat for you! The Children’s Museum has even more Star Trek excitement happening, starting on February 2nd!

First, in addition to the exhibit, there is going to be a new show in the Schaefer Planetarium and Space Object Theater at the Museum. It’s titled The Future is Here – How Sci-fi Becomes Reality and to quote the press release, this is what it’s about: “From computers and information storage to communicators and video-phones, to the U.S. space program itself, Star Trek and other science fiction works have influenced reality. We hope this new film and multimedia experience inspires a new generation to become the futuristic designers of tomorrow.” This sounds like a really neat, fun program, especially when you are told that George Takei will be the voice of the show! Yes, they got Sulu!

Now, if this isn’t enough of a Star Trek takeover, the Children’s Museum will be featuring even more Star Trek pieces in the theater, that aren’t a part of the MoPop travelling exhibit! These will include:

So, that’s a lot of added Trek bonus for the museum, and I know I’m really excited to check a lot of it out!

Finally, as I said, the opening of the exhibit is only a month away! Both the new exhibit, and the new show, will premier amid opening day celebrations which will include performances by the Indianapolis-based band, Five Year Mission! You’ve heard them on the podcast before (link), and not only are they going to be doing performances, their music is featured in the travelling exhibit!

Now, before we go, let’s review what you really need to know for this limited-run engagement!

I’ll see you there!

Note: Information and photos for this post was provided to me by The Children’s Museum of Indianapolis, to help promote their newest exhibit. All excitement, as you well know, is 100% me!