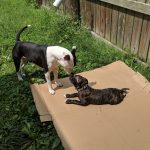 Happy Tuesday, my friends! We are back with another installment of Tuesday Tidbits, where I try to track down events that I think would be of interest to you, my fellow Geeks here in Indiana! Plus, hey, cute animal pictures!

I hope everyone had a fantastic weekend! Mine was fun, and very productive! We went to Bloomington on Saturday, to get to ITCE early, and had the opportunity to visit TWO new shops to add to the blog’s Shop listing! Then, we had dinner then coffee with friends that we’ve never really had the chance to spend time with outside of conventions, and it was fantastic! Sunday was Indiana Toy and Comic, and I had SO MUCH FUN talking to friends, meeting new people, meeting awesome people I only know from online, and having the real podcasters look at me weird when I talk about “not being a real podcaster”, but then pulling out equipment for them to use during their panel. I will have my thoughts up on this year’s show soon, but in a nutshell? I think Billy and his crew have really built something cool, and fun, and moving it down to Bloomington is probably one of the smartest decisions they’ve made. I’m looking forward to watching this show grow next year!

However, for now, we need to move on to the calendar! We have less than a week left of August, so we’re going to roll into September, and then October, both of which have new events added since last week! So, what’s going on?

September is starting on Saturday! What’s happening then?

October is also a huge month for Geeks, capping off with Halloween! However, there’s more than that happening!

Am I missing anything? Use one of those contact links to give me a shout! Have a great week, and I’ll see you later!
Tony