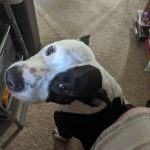 We have survived the first full, extremely busy, weekend in September, but it just doesn’t stop! There’s more going on, and there’s more being added!

So, what do we need to mark our calendars for?

Now, on to October!