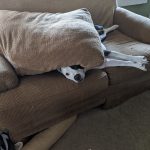 Tuesday Tidbits are back, but they’re not back in their original form. While I know stores are hurting right now, and some events are still happening, I can not in good conscience recommend places for people to go when there looks to be no end to this pandemic. So, instead, it’s going to be shorter, with an update on things happening around the Geek Cave, cool things I’m hearing about in not only the local Geek community, but in Geekery in general, and on occasion, a link to a cool online event for you to partake of! Also, of course, pics of the Geek Pets!

It’s going to take me a few weeks to get back into the swing of things, so please be patient with me. In the meantime, here’s some things that have been happening around the Geek Cave since I last wrote about it this past May.

Dang, it has been a while, hasn’t it?

This is where most of my energy has been going over the past few months.

Okay, I think that’s enough fluff for this week. Starting next week, I’m going to post online events and concerts, as well as other tidbits that I’ve found interesting through out the week.