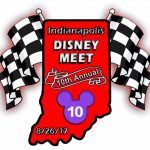 Here in Indiana, poor Hoosiers don’t have any real taste of Disney anywhere nearby. Most of the Disney Stores in Indianapolis have closed, leaving us a Children’s Place-reject over at Castleton Square Mall that is just a shadow of it’s former self (along with stores in Mishawaka and Merrillville, which I can’t speak to), and we are about 1,000 miles from the closest Disney Park. Luckily, we also have Hoosiers that have decided to do something about it, and do their best to bring a bit of the Magic to this fine state! That is what’s happening this weekend, over in Noblesville!

Now in its tenth year, the Indy Disney Meet is held at the Hamilton County 4H Fairgrounds, and it’s a pretty loose gathering of Hoosier Disney Fans. It has grown considerably over the last few years, and this year, the organizers are pulling a lot of great surprises out of their Mouse Ear hats! You see, not only do you have the opportunity to hang out with fellow Disney Geeks, but there are also a lot other things to see, such as:

In addition to all of that, this event is done to benefit the “Give Kids the World” Village, which provides week long, cost-free vacations to kids with life-threatening illnesses, as well as their families. You can find information on them here.

PLUS, they will be having a pitch in, using store-bought items or a covered dish with an ingredient list! This is just a whole lot of family-friendly fun!