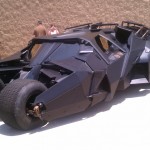 As I mentioned earlier this month, they are touring the Tumbler and the Batpod around the country to help promote the upcoming Batman film, “The Dark Knight Rises.” They allow the average fanboy to see something that they don’t normally get to see: an actual piece of Hollywood, and a very cool piece at that.

When the first images of the Batmobile from “Batman Begins” came out, I can honestly say I wasn’t a fan of it. It was clunky, it was a tank, it wasn’t the stealthy piece of equipment that we saw in the Tim Burton films, or the Animated series. This was about as stealthy as the neon monstrosities that were shown in “Batman Forever” or “Batman and Robin.”
Then I saw it dancing across rooftops in the theater.

It didn’t have to be stealthy. That wasn’t who this Batman was, yet. This Batman can get away with driving a tank through the streets of Gotham. 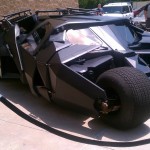 I wanted to have this car.

I know from promos and video shot by people on set that there will be more Tumblers in “The Dark Knight Rises” and the Batpod will also be there, because the shots of Catwoman riding it have been all over the internet. However, that isn’t here yet.

Yep, I took a half day today, grabbed Shannon and the Geekling, and went on down to the WalMart. There, I got to see this beautiful piece of 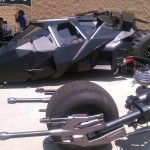 machinery in person. I walked around with the Geekling on my shoulders, and she got to see “Batman’s Car” even though it’s not the the car she normally plays with (she has the Hot Wheel of the Arkham Asylum Batmobile.) Then Shannon took her, and I was able to get some photos of the beauties.

I’ll let you decide which I’m talking about: The vehicles, or my girls.

Well, after we were shopping, we went to load up the Cardis when we noticed that they were tearing down the display. Shannon offered to keep an eye on Mary while I went over to watch them load up the vehicles.

The Batpod was pulled off the stand and just pushed into the trailer to be strapped down. A small piece came off of it, a piece that looked like some padding that someone grabbed to reattach at the next stop. I heard someone make a comment about it falling apart, and I just bit my tongue, thinking that it’s a Hollywood prop, we should be glad it’s stayed together this long!

Then came time to load up the Tumbler. That wasn’t being pushed.

I’ll just leave this here. It’s about 3 minutes long, and it was taken with my phone, so I apologize for the shaky cam experience. I’ll get better, I promise.

It was a great experience, and I’m glad I was able to make it.

For all the photos I took, visit here.
For the direct link to the video, go here.

Keep on Geeking on!
The Geek Explorer