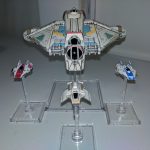 I know it’s been a bit since I wrote about X-Wing Miniatures, a game I have thoroughly enjoyed every time I’ve played it. I’ve talked about it a few times here, first as one of my “Must See” items at Gen Con 2012, then as a Geek Thoughts article in July 2015, and finally as a “Wish List” update of ships in December of 2015. Sadly, with the hectic schedule I had last year, I haven’t had a chance to pick up any ships, or play any games, since March of 2016, when I had the opportunity to pick up the Ghost and the Force Awakens core set.

As I’ve been hitting shops for #FLSFriday posts, I’ve been trying to make a purchase at each of them, provided I can find something of interest. Of course, when I hit a game shop, I immediately zone in on the X-Wing and Armada ships. Now, since I don’t own as much Armada, those it’s pretty easy for me to know what I do, and don’t, have. Yes, even with a year’s worth of releases, because they just haven’t released that much. However, as I look at X-Wing pieces, I find myself trying to figure out whether or not I own the ship, or if it’s one I can use.

The Ghost was just released when I last played, and it was in Wave 8. According to the X-Wing Miniatures Wikipedia article, Wave 10 was just released this month! Okay, so I’m not that far behind, right? Well, that’s why I’m pulling everything out of the box, seeing what I have, and seeing what’s next on my wish list.

After pulling everything, I realized I didn’t have all the ships I thought I did. Sure, I have a bunch of TIE Fighters (I’ve come across three core sets, after all!), along with Vader’s TIE, a TIE Interceptor, and the TIE Punisher. However, I thought I also had the Inquisitor’s TIE from Wave 8, but I have neither the ship nor the cards from it. I also have a few X-Wing fighters, from the Core Sets and with the Rebel Transport (not pictured), but I still don’t have the single packed X-Wings from either the original Trilogy or The Force Awakens, which I could have sworn I picked up a while ago. 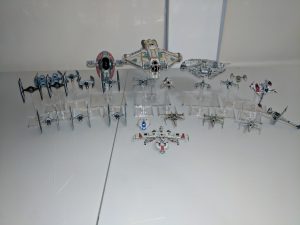 Anyway, the first thing I need to do is get all of my stuff reorganized. When I last played, we wrapped up so late that I just dropped everything in a briefcase and a bag and came home, put the stuff in the closet in the Geek Cave office, and didn’t touch it until this past Monday. I have damage deck cards everywhere, my range tools are scattered, and everything is just generally in disarray. I also need to reevaluate my storage system, as I’m running out of space for the ships. I know there are really nice cases you can get to carry everything, yet I don’t feel like I’m that hardcore of a player, nor do I think I ever will be. So, I’m doing the next best thing, and looking at tackle boxes.

Next, I need to actually start playing again. I know a few shops have X-Wing running on weeknights, and I have some co-workers I’ve played with in the past whose collections are gathering dust like mine is. What I most need to do, though, is get over my anxiety of messing up the rules. I’ve been out of the loop for a bit, and I always get anxious when I go to game nights, because it’s a bunch of people who have been playing for a while, and I come in with some lists I’ve printed off a X-Wing List Builder website, not remembering even basic movement and attack rules.

Then, once I’ve started playing again, I’m going to pick up more ships. (Warning: Affiliate Links incoming!) Once again, I’m looking at ships with an eye on what I think looks good, not really thinking about completing a set. There is a Heroes of the Rebellion set with a redone Millennium Falcon and Poe’s X-Wing (black & orange) that I like, as well as the U-Wing from Rogue One. In addition, despite the fact they said there would be no prequel ships made, there is an Arc-170 from Revenge of the Sith that I’d love to have. The final Rebel ship I’m currently thinking about is Sabine’s TIE Fighter, because I’m a sucker for Rebels, and I like the thought of having a TIE Fighter on my Rebel lists. On the Imperial side, I kinda want that huge black Upsilon Shuttle from The Force Awakens, along with one of those slick looking TIE Strikers from Rogue One.  These are on top of the ships I’ve mentioned in previous posts, that haven’t yet been picked up, and really don’t include any Scum & Villainy ships because, honestly, none of them call out to me as ones I could both play with, and display.

So, on top of EVERYTHING else, this is something else I want to do. How many plates can I spin, eh?