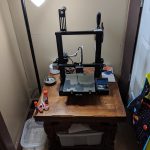 A few months ago, I wrote about my initial foray into the world of 3D Printing. What I got out of it was a few test prints, and a headphone holder. Since that time, I’ve worked on my new Ender 3 Pro and I’ve actually printed some cool stuff!

First off, when I left off last, I was having issues with the Z Axis. I was able to move the motor a smidge, which solved the binding issue! With that, I continued trying to get the bed leveled, but I’ll be honest with you, here. The Ender 3 seems to be notorious for shipping with warped beds. After trying everything I could think of, or was recommended online on various resources such as Reddit (links coming later), I went ahead and ordered a glass bed for the printer at the end of May.

When the bed was received, I was able to install it, and I had to raise the Z Stop (the switch that tells the Z Axis to stop moving down) so the machine wasn’t trying to force the filament nozzle down through the glass bed. Once I got that figured out, and ran the bed leveling GCode (Thingiverse link), I was able to successfully print a Benchy (Thingiverse Link), which is a great little tool that enables you to tweak settings and see how your printer is running. However, after I ran the first one, which came out really nice, I started having bed adhesion issues again. Well, since I didn’t have any Isopropel Alcohol around to try to clean the glass, I said, “Frak it!”, slapped some masking tape on the bed, hit that surface with a glue stick, and tried printing an SD Card holder.

The good news was, that SD Card Holder stayed adhered to the bed beautifully. The bad news? There was a layer shift on the top few layers, which caused the whole thing to be worthless. Still, these things happen, and I didn’t get too frustrated.

After getting another successful test, I turned to my first “large scale” project, which is getting printed for Lizz. I figure she gets the first “nice” thing off the printer, since she’s been so damn patient with me through all of this, in addition to helping build the machine and starting to learn 3D Modeling on Fusion 360. So, since she’s taken over custody of my Battlestar Galactica BDUs, gunbelt, and Double Tank set that I got before I gained about 60 lbs, I figured the best thing I could do is make her some pistols to go in the gun belt. I found this model on Thingiverse of the mini-series/season one pistol (Thingiverse Link) which I prefer because it looks a bit LESS like a real pistol, and with her blessing, I started printing, and completed it just this past week.

This prop is 13 pieces, which doesn’t include the shells or the stand, neither of which I wanted to print. I’d like to say printing was a breeze, but I’m still learning how to slice the pieces so they work properly. Some were really easy and came out fine the first time, like the trigger, the little pieces that go in the chamber, or the grip. Others, like the chamber, took me trying a few different orientations before I was able to get a successful print, and this one has a lot of support material to clean off! I also admit to making the genius move of trying to print one of the frame pieces upright, without any manner of raft, and it fell right over about 2/3 of the way though. Luckily, I was in the room when it happened, and I didn’t get a spaghetti mess of filament everywhere! You can see pics of what was done in the slideshow below.

As I was printing the BSG pistol, I printed a few other items, as well. I did still need a holder for all my USB Drives, my SD cards, and my Micro SD cards, so I went ahead and printed a different type of holder that’s a lot smaller (I can’t find the link again, pictures below) that came out perfectly except for some lifting in one corner. This is when I realized I was leaving the AC vent open, and the plastic was cooling and lifting off the headed bed. Yeah, the office becomes an icebox when the AC is on, even set at 76 degrees! This has not been a problem moving forward.

As I was wrapping up the pistol project, Lizz was setting up her desk in the revamped Geek Cave Office, and was commenting how her Funko Pop Figures kept falling over. This led me to find these stands (Thingiverse Link), which I’ve started printing out for her. I got three of seven printed, before I ran into a problem.

The machine has stopped feeding filament because the gear on the extruder is slipping.

So, I’m on hiatus until after Gen Con, when I’ll be able to get a replacement all-metal extruder. While I’m at it, I’m going to get some better springs that are supposed to help keep the bed level, and I’m getting a filament holder that’s not on top of the printer (to keep the printer from rocking back and forth as it feeds filament). Once the printer is back up, then what? Well…

After that? Who knows? I have a lot of stuff in collections on both Thingiverse and My Mini Factory that I’m interested in. It just depends on what I finally feel like making. I DO know I’ll start keeping better track of things like print time and Cura settings, in case anyone is curious about that.

Now, before I go, I wanted to list out some of the resources I’ve been using, where you can see my ongoing documentation of my projects, and my 3D Printing Wish List. No, I am not expecting people to buy anything off of it. I just want people to see the items I’ve been talking about purchasing, to upgrade the printer.

Now, here’s some pictures I’ve taken during the past few months!