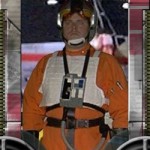 I know I’ve mentioned it here before, but I love costuming. I love taking what I see on screen, and putting it out there into the real world. Since I got into the “Geek” scene back in ’91, I’ve done attended conventions in a Star Trek: The Next Generation Season 3 Science Division costume, an X-Wing Pilot and Rebel Fleet Trooper from Star Wars, a Ghostbuster, and in various Fantasy-inspired gear. I really haven’t done any of this since 2008, though, with the exception of dusting off the Rebel Fleet Trooper for Mickey’s Not-So-Scary Halloween Party at Disneyland back in 2009. Sadly, all of those costumes and gear are currently shoved inside a storage unit in Southern California, and a lot of the gear is from the times before DVD and Blu-Ray editions of the films, and just will not pass muster any longer.

I have since decided that I need to put a bit more focus into this once more. I know I’ve said this before, but I am very serious. I’m calling it my “Costume Initiative: 2014.” I have a small group of costumes that I’m looking to get done over the rest of 2013, and into 2014, to wear to conventions, starting with the Lexington Comic and Toy Convention in March.

First, and I know I’ve been making noises about this ever since I got the game, but I need to make some N7 Armor 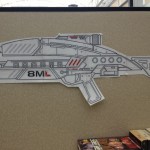 from Mass Effect. To be specific, I need to stock up on foam floor mats, a hot knife, a Dremel, and a new respirator, along with glue and all that fun stuff. I’ve found some good templates from various websites, and I’ve received some good advice from friends on Twitter. This armor is also going to have the M8 Rifle as an accessory, also out of foam, and that’ll be the piece I make first.

While working on this, I’m going to stretch myself a bit and recreate my X-Wing Pilot costume, as seen in the image at the top of this post. This costume was put together in 2001, and since that time, there have been a LOT of changes in how we thought the costume went together, and worked. Instead of modifying what I have, I’m just going to start from scratch. This means a new jumpsuit, helmet, chest box, vest, arm tools, arm pad, belt, harness, boots, leg flares, the whole nine yards. I’m not sure how I’m getting the money for this, but I’m working on it.

Also on deck is a uniform from “Star Trek: En 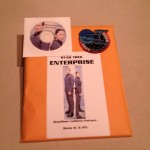 terprise.” Yeah, I’m that weirdo that, when someone asks “Kirk or Picard?” I answer “Archer.” I’m sorry, but they are Star Trek costumes WITH POCKETS. How can you NOT want one of these? I have the pattern, I have most of the material, but I don’t have the skill to sew it. So, I have two options. First, I can find an inexpensive sewing machine at a thrift shop, and teach myself. Or, I can find someone local who is feeling feisty. Luckily, someone off of the Starfleet 1701st Message Board that put together some good information on this costume is local, so I’ve thrown him a message to see if he’d be willing to take on a commission. Otherwise, we’ll see what happens.

Finally, the fourth costume that I would love to try to get taken care of by Gen Con in 2014 is a Vault Dweller from the “Fallout” series, especially “Fallout 3” or like the “Nuka Break” fan series. Jumpsuit, Pip Boy, and a Plasma or Laser Rifle are the order of the day for this piece, which will be interesting. The Pip Boy will probably just light up, perhaps some glowing on the rifle, but past there? Just a nice, comfortable costume for wandering the halls. Nothing real fancy.

Now, while I am looking at a lot of costumes that involve jumpsuits, I am also looking at costumes that, at least in my mind, I need to be in decent shape for. I don’t view myself as morbidly obese, by any stretch of the imagination, but I could use to drop 10 to 60 pounds, not just for costuming, but also for my personal well being. This is part of the “Costume Initiative” that I’m talking about, the effort to actually pull off the costume, and not just be a chubby fanboy wrapped in cloth. I’m not going to go into detail, but when I start the “Costume Initiative” section, I’ll post links to the apps I’m using, and the sites I’m using, to keep track, so you can play along.

As I’m working on these, I’m planning on documenting everything, if you would like to play along. I’ll let you know where I’m finding patterns, what I’m making, what others are making, and taking photos. This is the sort of thing I love doing, and I can’t wait to share it with you.

Let’s get creative and make some stuff!
Tony