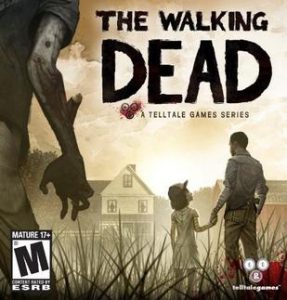 It’s the comic series that has reached over 150 issues and is still going strong. It’s the show that seems to have no ending in sight, and recently ended its seventh season. Everyone’s heard of it; nearly everyone watches it. The Walking Dead, in all of its different shapes and forms, is something that I am an avid consumer of, and even when the quality starts to dip, I continue to consume and enjoy. I love the comics, I love the show, and back in 2012, the possibility of a video game was something that blew my mind. As more information emerged, such as the story being based on new characters instead of the comics, my excitement started to dull. Nonetheless, I still got a copy of the episodic title when it was released as a complete ‘season’.

And, much to no one’s surprise, I loved it.

Telltale’s The Walking Dead tells the story of Lee Everett, a convict in Georgia who finds himself the caretaker of a ten-or-so-year-old girl named Clementine, at the very beginning of the outbreak. They go on a cross-state journey of survival in search of Clementine’s parents, and meet a variety of characters along the way, including the brash redneck Kenny and his family; the vindictive Lilly and her aggressive father Larry; and even the occasional familiar face to those who watch the show or read the comic, such as Hershel and Glenn.

I will avoid spoiling the game for those who wish to play it. It is a very story-driven game, and that story is wonderful, engrossing, and heartbreaking (as can be expected with a Walking Dead title). The game was initially released in a series of five episodes: “A New Day,” “Starved For Help,” “Long Road Ahead,” “Around Every Corner,” and “No Time Left”. The story was extremely well paced over the course of the five episodes, utilizing excellent cliffhangers and endings to rope you into playing the next installment.

That being said, this is still a video game, though I would say the term “game” is applied loosely, at least in the traditional sense. The story in this game takes the forefront, and there really aren’t a lot of game-play mechanics. The one main mechanic is that of player choice. Conversations with characters, scenarios with multiple endings, and other places choice would be applied contain a four-button response system, presenting different choices for the player. This allows for some difference in play, as certain choices effect certain situations, and can possibly change the outcome. Now, these choices aren’t that heavy, and in the end, don’t truly effect much; but in the moment, they add an a good amount of tension, and really compliment the story being told.

After all five episodes were released digitally, they were released together on one disc with the name “Season One”, and this is how I played it. I bought the Xbox 360 version, but it is also available on PC and other consoles. The game contains the blood and gore we’ve all come to love with the Walking Dead franchise, so the game is rightfully rated M for Mature.

I had an incredible time playing through this game, and I recommend it to fans of the franchise, but also those in the mood for a heartbreaking, tense horror story. A “Season Two” was released a while back, and “Season Three” is finishing up currently. I hope to write about both in the future!

See you all next time!