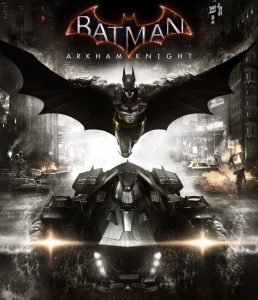 So it was my birthday back on the 21st. I had a pretty darn busy day, working during the day and performing in Jekyll & Hyde at night. A high point of the day however was my gift to myself: Arkham Knight for Xbox One. Jekyll & Hyde was a blast, but it’s over now, which leaves me with plenty of time to do some much-needed gaming!

Batman: Arkham Knight is the final game in Rocksteady’s Arkham series, which started way back in 2009 with Arkham Asylum, and continued on with Arkham City and technically Arkham Origins (different developer, same style). The games let players explore in a rich and detailed rendering of the Batman universe, and interact with countless characters, items, and places from the Batman mythos. The Arkham games are very well regarded for their intense atmosphere, challenging-yet-simple game play, and adherence to the Batman canon. Arkham Knight is no exception to this.

I have had a blast with this game, due in no small part to its incredible story and game play. The plot of Arkham Knight involves classic Batman villain Scarecrow causing a mass evacuation of Gotham City, with the threat of massive fear gas bombs causing chaos on the streets. This chaos is encouraged by a new military force in town led by the mysterious Arkham Knight, who is working with Scarecrow. I refuse to spoil the absolutely incredible story that this game offers. The story draws heavily from Batman lore, while putting a fresh spin on things and offering crazy twists and turns all the way through. One of my favorite parts of the Arkham games is the inclusion of many of Batman’s rogues gallery, and this game has plenty of awesome villains. There are side quests involving classic villains like Penguin, Two-Face, and Riddler, as well as newer villains such as Professor Pyg and Deacon Blackfire. However, my favorite mission had to be the inclusion (finally!) of Man-Bat, whom you had to track around Gotham.

The Arkham games are fairly well-known for their game play; the games feature a nice combination of free-flowing combat, rich exploration, and Metal Gear Solid-esque stealth sequences. For the most part, I felt like Arkham Knight polished the game play of the previous games to perfection. I spent countless hours exploring all of what Gotham had to offer, and beating up thugs on the street was just plain fun. However, one issue I had was with a feature brand new to Knight: the Batmobile. The Batmobile can be driven around all of Gotham City, which really speeds up missions that take you from one corner to another. However, so much of the game involves using the Batmobile, and the mechanics of it aren’t quite as polished as the rest. I became extremely frustrated on several occasions by the difficulty involved with Batmobile combat, and I chose to explore Gotham on foot more often than driving around.

All in all, I’d say the money I spent on this game was money well spent. Arkham Knight brings the Arkham series to an awesome conclusion that both gamers and comic fans can enjoy. The game is available on Xbox One, Playstation 4, and PC (Amazon Affiliate Links – ed.). I’m not much of a PC gamer, but back when this game was released, there was a lot of uproar involving the PC port not being finished, so be warned if you’re interested in that route.

As far as I know, I’ll be back next week with another post! It’s almost time for me to go back to IUPUI….where did summer go?!