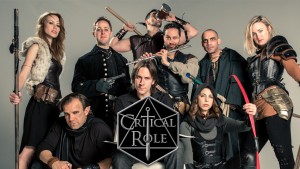 I love playing Dungeons and Dragons, but mine is a new love. I had always wanted to play, but never knew how to get a hold of the materials (and other players) needed. I happened to be out with my friends at my local game store, Goblin Games in Kokomo, on the day that the 5th Edition Starter set came out. I had no intention of buying it, but after pointing it out to my friends, I realized that they would all want to play the game with me. So I bought the Starter Set, and ever since D&D has been a major part of my life. I spend many hours a week writing and developing my campaign, and I play with my seven-person group every Monday. However, D&D most definitely wouldn’t be as big a part of my daily routine as it is now if I hadn’t discovered Critical Role.

Critical Role is a weekly role-playing show created by Geek & Sundry. The show is livestreamed every Thursday night at 10 p.m. EST, and uploaded in 3-4 hour segments on Geek & Sundry’s website on Mondays. The show is a weekly session in a home-brewed D&D 5th Edition campaign, run by the extremely talented (and quite possibly one of the best) Dungeon Master Matthew Mercer. The 7 person party is made up of voice actors Liam O’Brian, Laura Bailey, Travis Willingham, Marisha Ray, Ashley Johnson, Sam Riegel, and Taliesin Jaffe (previously, voice actor Orion Acaba was part of the show, but sadly he left to pursue other projects. He is in most of the episodes uploaded on G&S, as his departure is recent).

The fact that all 8 of the participants in this campaign are professional voice actors makes this one of the most enjoyable games to watch on the internet. Dungeon Master Matthew Mercer brings a sense of wonder to the table, giving beautiful detailed descriptions of every location, and a separate brilliant voice to each character. The players all bring their characters to life in a way that really makes you empathize with them. The story is well thought out, and Mercer is extremely skilled at improvising when the party goes off track. The players all have great chemistry with each other, both inside the game and out. All in all, these people are just fun to watch.

The way the campaign is written and the way each character is brought to life is extremely inspiring for up-and-coming Dungeon Masters like myself. Before I discovered Critical Role, my D&D sessions were nonsensical and random, with constant arguments happening between myself and the other players. Now, I have crafted a detailed world that captures the imagination of my players, leaving them enthralled, and really helping them develop their characters. Watching Critical Role not only helped me with my D&D skills, but it also helped me become a better storyteller in general, and significantly increased my ability to improvise.

Critical Role can be watched live at 10 p.m. EST every (well, nearly every) Thursday on Geek & Sundry’s Twitch channel, and uploaded in 3-4 hour sessions the Monday after on Geek & Sundry’s website. I definitely recommend checking this out if you love D&D, love voice actors, and overall just love watching a bunch of great, hilarious people enjoying each others’ company. They are adults, so there is occasionally a dirty joke and some adult language. They are only 32 episodes in, so if you have a lot of free time (like I did last summer), you can get caught up and start watching live! That is, as long as you don’t mind not getting much sleep on Thursday nights. This is a show that really has a deep connection to my Geek life, so I really love being able to share this one with you.

Next week, I’m either gonna talk about a video game or a documentary. Whichever I finish first. I guess you’ll just have to wait and see!