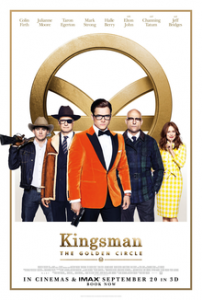 Remember a while back, when I wrote about the first Kingsman movie (Link)? I had such a blast with that film that I had planned to go see the sequel in theaters. Well, that unfortunately never happened. In fact, due to my scatter-brained nature, I honestly kinda forgot about this film. I didn’t see much online about it, so I assumed it either flopped or was just average, and so it faded into the recesses of my mind. Well, in prepping blog-work for Tony’s upcoming cruise, I came across an old list of possible blog topics I had made a while back, and lo and behold Kingsman: The Golden Circle was the top of the list! So, I quickly dropped everything I was doing, and started up this movie with a renewed sense of agency. What did I think of it?

Did that seem unenthusiastic to anyone? Well, Kingsman: The Golden Circle is good – and fun! – but not great.

The film picks up a while after the first. Eggsy, still played by Taron Egerton, has created a fairly decent life for himself. He still works for Kingsman, he has found a close family with them, and he is finally meeting his girlfriend’s parents. Everything seems to be looking up, until The Golden Circle, a massive drug cartel led by Poppy Adams (played by Julianne Moore), destroys the Kingsman headquarters, sending the world into a drug-filled mess. The film once again features incredibly choreographed action and fun set pieces, and the music is as fabulous as ever.

Much like the first film, I found the Kingsman sequel to be incredibly well cast. All the old favorites return, but new additions such as Halle Berry’s Ginger Ale or Jeff Bridges’ Champ add a whole new charm, as we are introduced to the American version of Kingsman, the Statesmen Brewing Company. My favorite new addition to the cast was Pedro Pascal as Agent Whiskey. I already loved him going in because of his work in Game of Thrones, but he really stole the show anytime he was on screen. However, Pedro Pascal’s character also brings me to one of my biggest complaints with the film.

The new characters were all super fun, but they were criminally underused. They got very little screen time and development, and yet there were so many major plot moments that depended on us really caring about these new characters. I feel like the plot would have majorly benefited from either reducing the importance of these newbies and focusing entirely on the returning characters we already love, or perhaps using the old characters to heavily facilitate the growth of the new characters. The lack of characterization left a bad taste in my mouth, but I did still enjoy the film.

Overall, I did enjoy Kingsman: The Golden Circle, but I think I still prefer the first one. The action was fun, the cast worked well together, but some sudden and jarring plot moments dependent on characters we don’t really care about took some of that fun away. If you are a big fan of the first movie, or of the comics, then I’d definitely recommend checking it out. If you’re just a casual fan, however, then I won’t push you to see it.

Tune in next week to see what I have to talk about next! I sense some video game-related posts coming in the future.

Til next time, folks.