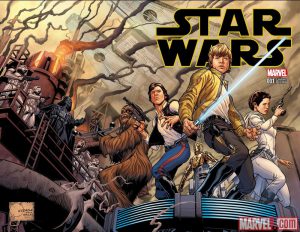 There are many combinations that people find exceptional: chocolate and peanut butter, peanut butter and jelly, bacon and lettuce and tomato. To me, Star Wars and comic books go together just as well as those other things. Many of the first comics that I owned were Dark Horse Star Wars comics, and buying them is a habit that will continue for a long time. When Disney bought the rights to Star Wars a while back, the comic licensing rights went to Marvel, who started several new lines of comics. This recent holiday, I received volumes 2 and 3 of Marvel’s Star Wars, and so far, I have been extremely impressed.

Marvel’s Star Wars comics take place in the time between A New Hope and The Empire Strikes Back. With that being said, it’s a given that the stories focus on the main cast, mainly Luke Skywalker. These comics have introduced some pretty awesome story arcs and characters into the canon, and I really can’t get enough. Some of my favorite bits so far include a fight between Luke and Boba Fett in the home of Ben Kenobi, Luke’s imprisonment at the hands of a Jedi Artifact-collecting Hutt, and the attack on a rebel prison hidden near a sun. Another interesting plot device used is the journal of Obi-Wan Kenobi, an item that Luke acquired on Tatooine. Excerpts from this journal are used to tell stories about Obi-Wan’s time on Tatooine, as well as most recently a tale about Yoda set during the prequel era.

My favorite part of the comic series so far has to be some of the new characters introduced, specifically Grakkus the Hutt and Sergeant Kreel of SCAR Squadron. Grakkus is the previously mentioned hutt, who collects Jedi artifacts. This particular Hutt is absolutely ruthless, and while I am a huge fan of Jabba, Grakkus is cool in lots of different ways. While I haven’t read it, I actually believe that Grakkus has also made appearances in the Poe Dameron comic as well! Sergeant Kreel is my personal favorite new character, a lightsaber-wielding no-nonsense stormtrooper in charge of SCAR Squadron, an elite group of extremely capable stormtroopers who all have unique and awesome personalities themselves.

I find this comic really great, and I encourage all Star Wars fans to check it out. The new events and characters that have been added to canon are awesome, and I love that they aren’t ignoring elements of the prequel era like so many books tend to do now. If you’re interested, there are at least three trade paperbacks released so far: Skywalker Strikes, Showdown on the Smuggler’s Moon, and Rebel Jail. They are available in many places, namely this Amazon affiliate link. However, especially if you are like me and want to start reading this series on an issue-to-issue basis, I implore you to check out and support your local comic shop!

Thanks for reading, everyone. Apologies for the short length of this particular article, but I really wanted to talk about this comic, and I really don’t like padding my articles with fluff (though I admit I have in the past, a habit I am trying to break).

Tune in next Monday for the next exciting installment of Media Monday!