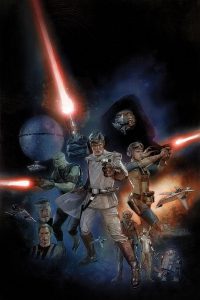 As we all know, all of our beloved films and shows underwent draft after draft before magic was sent to our screen. Often, those early drafts do contain a semblance of what we ended up with. Other times, the early drafts are so far from what we got that its hard to tell that they are even related. A while back, Dark Horse published a series of comics based on George Lucas’ early drafts for Star Wars. As a massive Star Wars fan, this was something I knew I had to own immediately. How cool is it to see what was going through ole’ George’s head to get us the Star Wars we know and love?

Well, I bought the trade paperback edition, and read through it with incredible speed. Its decently thick for a graphic novel, and I loved every second of it. It was made clear right off the bat that this wasn’t Star Wars as we know it: this is The Star Wars.

Telling the tale of Annikin Starkiller, Princess Leia of Aquilae, Han Solo (a big green fish monster), and General Skywalker of the Jedi-Bendu, this story is quite a dang trip. It was incredible to see familiar names used for drastically different characters (i.e. gilled Han Solo), but it was also really cool to see the plot unfold in a fairly different way.

In this telling, we follow a ton of different heroes: General Skywalker, Princess Leia, Kane Starkiller, Annikin Starkiller, Threepio & Artoo, Whitesun, and Leia’s twin brothers Biggs and Windy. That is a crazy amount of characters to keep track of! Annikin Starkiller is a lot more like the Luke we end up with, but he is already a Jedi at the beginning and is in love with Leia, not related to her. General Skywalker fills the Obi-Wan slot, though he is not old and wise; he is old and vicious. Threepio & Artoo are mostly unchanged, except for one major difference: R2-D2 speaks in full, English sentences. That is one change that was really hard to get used to.

The characters flee the main planet Aquilae after the Empire brings their new battle station to attack. Our heroes end up crash landing on the planet Yavin, where they meet the friendly local trappers Owen and Beru Lars. With the help of the Wookiees (which look like bigfoot combined with a gremlin) native to the planet, our heroes commandeer Imperial Y-Wings, train the savage Wookiees to fly, and go blow up the battle station. It hits many of the same beats as the finished film does, but boy are those changes something to behold.

Everything in this comic, from the characters to the locales, was based on Ralph McQuarrie’s concept art, and it is awesome. Everything looks so incredibly different, yet there are definite traces of what we eventually got. The art is something I sing high praise about in this book: every panel was incredibly beautiful and well-made. I honestly would love to have prints of the pages just to hang up on my wall!

As a massive Star Wars fan,  I considered this a must-read, and I recommend it to all the other major Star Wars fans out there. It is incredibly satisfying to see a fresh take on the masterpiece we got. However, I really can’t recommend this to people who are just casual Star Wars fans, or not fans at all. Its just too weird to grasp if you aren’t super invested in the lore.

I’ll throw up an Amazon Affiliate Link right here to the book, so any of you readers who are interested can consider picking up a copy!

I’ll see you all next time,