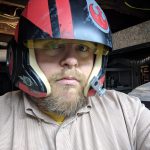 Back in 2015, I did a Costuming Bucket List talking about all of the costumes I really want to make. Most of the way down the list is the Resistance X-Wing Pilot from the most recent Star Wars flicks. Since this year, I’m looking at following through on many of my projects, I decided to make this be one of the first things I’ve been talking about, that I’m going to work on until it’s complete!

So, the first step I’m taking is working on the helmet. Late last year, the “Black Series” version of the Poe Dameron helmet was released (Affiliate Link). It kicked off around $80, but there have been sales since then, so I was able to pick one up at a good price. These are really great helmets straight out of the box. They are well padded to fit a child’s head, with electronics that allow you to hear what a “real” X-Wing cockpit would sound like, letting you hear engine noises, BB-8, and attacking TIE Fighters. With the padding in, it’s rather small and won’t fit my melon, but guess what? That padding is only attached by circles of Velcro, so you can pull it out and BAM! It fits like a glove. A glove on your head.

Now, since I don’t look anything like Oscar, I am going to be changing the look of the helmet. My old X-Wing Pilot was black, red, and silver, which is too much like this one. However, my A-Wing Pilot (LINK) had more of an earth-tone look to it, with shades of green, so right now that’s what I’m trying to envision. Other than the color, though, there are other modifications that I know I need to make to it. For example, the ON/OFF switch needs to be removed and filled in, the cover for the battery compartment needs to have a divot filled in, and there are parts that need tightened up, so they don’t rattle around. In addition, I’m going to replace some of the details, like like microphone, with nicer 3D printed pieces.

I recently got started on this project, and there are some photos below. Right now, I’ve completed the tear-down phase. After I got the work space set up, I immediately moved the helmet and some screwdrivers down, and started taking out twenty plus small screws that were keeping the interior, and the electronics, together. These are currently on a magnet, making sure I don’t lose any. As they were removed, I had to pry some pieces apart, until I had everything disassembled. This includes removing all of the electronics, sometimes having to cut the wires because I really don’t need them in the helmet!

With this complete, I started the next step yesterday morning: the filling of the ON/OFF switch and the battery cover. I was going to start this late last week, but sadly I found out my Bondo had a shelf life, and it was way past it. So, after picking up a new can this past weekend, I was able to mix some up and put it on. It spent the day drying, and in a few weeks, I’ll start hitting it with sandpaper, until you can’t tell those spots were there at all. This is going to take some time and patience, especially on the “divot” section, as I’ve never been real strong on rebuilding sharp corners, or curves.

As I’m working with this, I’m also trying to prep the rest of the helmet for painting. To be fair, painting will not start until it gets warmer outside, as I’m not painting near my heater as it’s running. I’ve got to get parts sealed and glued together, I need to get the upgrade pieces in, sanded, and attached, and I need to finalize my paint and how I’m going to make it comfortable, yet still fit. This is all the fun stuff!

I’ll probably be silent on this for the next few weeks, though, as it’ll be difficult to find time to work as I’m working overtime at the new job, and trying to prep for the cruise in a few weeks. However, don’t think I’m forgetting about it! In fact, the next episode of the podcast will be touching on this, as well!

So, in the meantime, enjoy a few shots of my progress, and I’ll see you all next week!