I’ve always liked the costumes from the Rebellion in Star Wars. They don’t contain much, if any, armor, so they’re easy to sit down in. They don’t have full face helmets, so you have decent peripheral vision. They’re just, in my experience, much more comfortable costumes. One of the easiest, most comfortable costumes was one I did fifteen years ago, and that’s the Rebel Fleet Trooper (RFT) from Star Wars: A New Hope.

In 2005, I was looking for a costume that I could just walk around conventions in, fairly comfortably. So, I contacted the people at Studio Creations and ordered one of their helmets (link, where you can still order one), got supplies to make a belt and holster from Tandy Leather, found a pair of grey wool pants and a black BDU jacket at a local army/navy surplus store, and had a blue shirt made for me by my mom (thanks, mom!). I already had a resin copy of the pistol that I had picked up at a convention in the late 90’s, and the boots were the same boots as my X-Wing Pilot, which I wore at San Diego Comic Con in 2001 (more on that on 10/16). I 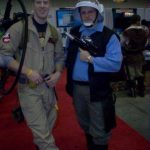 fashioned the holster to look like a tan version of the Stormtrooper holsters, and I cut the sleeves off the BDU jacket and hemmed the holes to make the vest, which was the fashion at the time. This all worked great for my first Gen Con that year, here in Indianapolis. I got pictures with friends, I talked dance pads and guitar games with Red Octane, and I got interviewed for X-Play on G4, though it never aired. Then, the costume got tucked away in a closet for a few years, was hauled out to California, and was dusted off in 2009 for a visit to Mickey’s Not-So-Scary Halloween Party at Disneyland, where I had a good time with the Geekling and a fun run-in with someone who told me I should submit the costume to the Rebel Legion, which caused me to just laugh.

In 2010, life started going through a lot of changes, and while I’m still missing a lot of stuff, I was able to get most of the pieces of the costume back from SoCal around 2016. By this point, neglect in a storage unit had caused the shirt, vest and pants to be unwearable (which was okay, because they weren’t accurate anymore), the white helmet had severely started yellowing, and the belt, holster, and boots had started drying and cracking. The resin pistol had become incredibly brittle with age, and somewhere along the way had lost the trigger. Frustrated at the statie it was in, it got pushed aside for another time.

As you may know, last year I finally got back in with the Rebel Legion, and started doing costuming with the local group again. This caused me to want to fill up my costume closet again, and after I did the Resistance Pilot, I started my list of outfits I wanted to procure again. Well, as many of you are aware, I do love my vests, so I started looking at that RFT again. 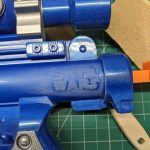 Over the course of the last 9 months, I’ve been slowly putting things together. My initial push was to get things ready for May the 4th, but the pandemic pushed those plans to the side. Still, by the time that had happened, I had restored my old boots, and I had picked up one of the Rebel Fleet Trooper Nerf blasters off of eBay (similar listings). I also disassembled the old helmet, cleaned it off, and hit it with some white spray paint to restore the color. More recently, I have talked to my buddy Phil with Spacey-Wacey Wear (Facebook link) and ordered one of his Rebel Fleet Trooper Vests (Facebook Store Link), and blue RFT shirts (Facebook Store Link). Plus, I have been asking around, and doing some research on the last couple pieces I need.

When it comes to the pants, there is nothing extremely accurate out there, so people have been focusing more on uniformity, so all the RFT costumers can look fairly similar. I’m going to be going with a pair of Rothco Grey BDU pants, probably off eBay (link) to get this taken care of. I’m not attempting to get back into leather work, so I’ve been shopping around for a belt and holster to carry the aforementioned Nerf gun. The group over at Launch! A Rebel Fleet Trooper Costuming Group on Facebook (link) recommend the work of “DarmansProps” over on Etsy, who sells the belt and the holster as a kit, along with your choice of belt buckle style (link). The belt does not come with those silver boxes, and I’m still debating whether or not I want to mess with them, since not all of the costumes have them.

Oh, and of course, I’m following the standard for inclusion in the Rebel Legion (link). 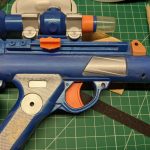 I’m hoping to get this wrapped up fairly quickly, especially as most of the kit will be ordered already made, as opposed to needing built. The only pieces I need to work on are the helmet and the blaster pistol, and those parts are fairly easy. I just need to take the time to go to the basement and work on them.

Next week, we’re going to look at the other costuming project I’m re-doing, this time after almost 20 years. In the meantime, stay safe, stay healthy, and keep wearing those masks over your mouth and nose.