I don’t sit still well. Which means that of the many podcasts I like, there are only two that I love enough that I always listen to the latest episode. Of those two, only one is comics related. And since comics are sort of my whole deal here, today I’m spreading the good news about Rachel and Miles X-Plain the X-Men. 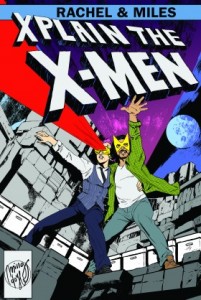 They have a successful Patreon, occasional episodes guest-hosted by Chris Sims, and interviews with creators like G. Willow Wilson and Greg Rucka, so you may already be familiar with this podcast. And I’m kind of presuming here that “familiar with” equals “super into”. So if that’s the case, long-distance high five for liking awesome stuff.

The concept of the podcast is right in the name: Rachel Edidin and Miles Stokes are explaining the X-men. And if you have even a passing knowledge of the Xavier Institute, you know that’s something of an undertaking. The X-Men have been around since the 1960s, currently have 11 different X-affiliated monthlies (possibly more – are the Death of Wolverine books still going?), plus all of the books that have come and gone in the intervening years. There’s a lot to contend with. People have been killed, brought back,  and body swapped. They’ve been de-powered, re-powered, mind wiped, and sent to/pulled from alternate futures. And Rachel and Miles are committed to making it as straight-forward as possible. Which means at some point, they’re going to have to try to make the Siege Perilous make sense.

These people are out there doing the lord’s work.

Beyond that, they’re really exploring the broader significance of these stories, how the stories approach (and sometimes majorly mess up on) social issues, whether they succeed on a narrative level, and whether they’re an enjoyable read. So, they’ll readily point out why/how New Mutants is “great at diversity, except when it’s terrible at diversity.” They’ll also discuss which X-character wears the dumbest hat. This deep-dive approach, paired with the honesty and excitement you get in every episode is why I trust their recommendations more or less implicitly at this point. Which is why I’ve now got X-Men: Season One chilling on my bookshelf, along with New Mutants, and the X-Factor Investigations run of X-Factor.

Which I’ve taken to calling Madrox, P.I. because these are the sort of jokes I make to myself (and possibly on twitter. Sorry, twitter).

Every episode also has a visual companion gallery on the website. Because hearing about the reality-breaking horror of Bill Sienkiewicz’ Demon Bear (or the glory of Cyclops’ gold octopus tunic) isn’t the same as getting to see it.

If you’re going to check it out, start from the beginning. Which… that’s going to be a theme with me. I’m usually going to vote that you read/watch/listen to something in its entirety because who wants to miss stuff? Missing stuff is terrible. For this, though, it really is the way to go. Rachel and Miles lay things out pretty clearly, but sometimes episodes lean on things they covered previously. Plus, there are callbacks and in-jokes that will be nonsense otherwise. You deserve to fully understand the joy of Peter Corbeau.

Rachel and Miles X-Plain the X-men has new episodes every Sunday, and is available on iTunes and Stitcher, so go there. Get it.

And, speaking of X-men, I bet there’s some on the list of….

I use pulllist.comixology.com to track my list, then I buy my books at Downtown Comics. You can find your closest comic shop using Comic Shop Locator. Or, use the magic of technology to get them instantly with Comixology!