I had my entry for this week planned. Since I started here, I knew that when Pirate Princess came out, that’s what I would right about.

So, for one week only (unless something like this happens again, in which case substitute in the accurate value), it’s DOUBLE THE BRI!!!!!

This would be an awesome place for a sequel name wordplay gag, but I usually only get as far as Beyond Thunderdome, and Die Harder before I tap out.

Here’s the thing – Marvel and DC both have some multiverse-smushing mega-events on the horizon this year. While big announcements can lead to a Name That Tune-style rush to be the one to be cynical on the least amount of information, I try to be neutral on things. Yes, both events could be terrible. That’s true with anything. Even the most beautiful cake can have pineapple in it. I’d rather either way and see. Or even hope things turn out cool (and result in lasting changes). So, with that covered, let’s talk about last week’s announcements.

Quick context, in case hero books aren’t your jam: DC has Convergence kicking off in April. They’re going to stop ALL of their comics and replace them with 40 different 2-issue mini series that will include alternate versions of characters – including ones that were cut/lost/unmade in the New52 reboot. Apparently it has something to do with Brainiac putting people in domes because…science? Look, my DC experience is  basically 1/3 of the Gotham books, plus a slowly expanding collection of Pre-New52 stuff. And… most of those are Bat-books, too. The big DC stories seem nutso to me, but largely because I don’t have context for it. My approach tends to be to shrug, dive in, and google where it’s necessary. It’s an approach I recommend, because some of these minis pair awesome creative teams with characters I know nothing about. Plus, DC has done some things to characters back-stories in the wake of previous events.  So being chill about canon might be a survival skill soon.

Once Convergence ends, DC is launching 24 new books (and cancelling a bunch). The new slate is heavy on things that have a lot of potential, but since I don’t DC a whole lot, I’m at “Oh, huh. Cool.” level of excitement. Brenden Fletcher’s work on Gotham Academy and Batgirl is enough to make me want to check out the Black Canary solo book, and when you add Annie Wu and Irene Koh on art it becomes a definite pre-order. 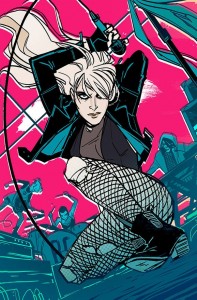 Also, we have similar taste in hosiery

Mystic U is currently just a title and a writer (Alisa Kwitney), but if there’s even a CHANCE that it’s 20-somethings in magic college, I have to buy it. I just… I have my weaknesses. 20-something magic users are most of them. Throw in a girl detective and I’ll be morally obliged to buy 5 copies a month.

Marvel, meanwhile, has Secret Wars 2015 which is… also sort of confusing? It’s starting in May, and shards of all sorts of Marvel Universes (and points in 616 history) are being assembled into Battleworld.  The same thing happened in the original Secret Wars, but it’s my understanding that all the characters the reader knew/cared about were current timeline 616ers (this understanding provided by Rachel and Miles X-Plain the X-Men, because I told you that show rocks). This time will be different. Marvel has this nifty map where you can see timelines like Age of Apocalypse and Days of Future Past have their own turfs carved out. The Ultimate Universe will be represented here.

The Ultimate Universe will also die here, btw. Mile Morales is sure to make it out, but it’ll remain to be seen who else survives.

Marvel is making announcements every few days, but I want to focus on one book because, well… 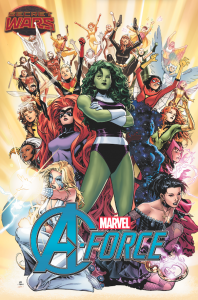 LOOK AT THE THING THEY MADE.

It’s a freaking all-female Avengers team on an island of awesome Marvel Super-Women. Hallmark could make a very compelling family film wherein being handed this book restores my once-faded belief in the goodness of the world just before I close the puppy orphanage that employs half the town.

“You’ll have to build your robot-run poison factory somewhere else, Mister Grant,” I’ll say with a wry smile, “this land isn’t for sale.” And everyone will cheer, and a terrier will wink, and I’ll go READ THIS COMIC.

She-Hulk, Medusa, Dazzler, and Nico are confirmed to be fairly central to the story. If you’re not familiar with Nico, she’s from the much-loved Runaways series (that’s an affiliate link).  And honestly, look at that cover! If you have a favorite, she’s probably going to show. Personally I immediately zeroed in on the Classic Costume Jubilee at the top right, because that’s how I roll.

Then I convinced myself that maybe they’ll re-power her in this event. Or even better, re-power her but not undo the last several years of growth for the character. By character growth, I mean she has a baby now. She’s a 20-something vampire with an adopted baby. In case you didn’t know.

And yeah, I know that it’s just the X-Men 1992 Jubilee so the odds of me getting what I want out of this are low, but let me have this for now. Because why live if you can’t love like you’ve never been hurt?

Jubilation Lee pipe dreams aside, this is a really exciting book done by a pair of writers who seem interested in who these characters are as people, and how that would inform their interactions. I was always going to read Secret Wars. It’s a line-wide event, and missing story points makes me anxious. But my feelings about it were basically a giant shrug. A-Force is the announcement got me actively looking forward to the launch of this event.

So how about I read it, and you read it, and everyone reads it, and it sells a billion copies and goes on forever? Sound good? Good.

I mean, it’s been a couple hours. It wasn’t going to change.

You go to the places. You do the things. Pulllist.comixology.com. Downtown Comics. Comic Shop Locator. Comixology.