We’re going to talk about something a little different this week. 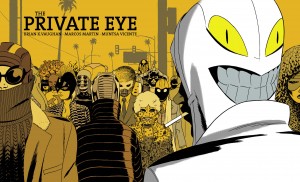 Private Eye is about an unlicensed private detective in the future. Also, the unlicensed detectives of this future are called paparazzi. And the cops of this future are the press. And everyone wears masks. Literal masks. Because at some point prior to the start of the book every piece of information you ever put into the clouds (texts, snaps, search history) goes public. Now the internet is gone, and  privacy is something you can only acquire by purchasing a fancy mask and a fake identity to go with it. It’s essentially a noir-style detective story with a girl who gets in over her head, and an inciting incident that’s really just an opening act for the big, status quo-undermining main event. The big difference – other than the magnet cars and invisibility jackets – is that our Sam Spade isn’t a smirk and shrug Bogart type; he’s a rangy, pissed-off twenty-something.

There are currently nine DRM-free issues of Private Eye available via Panel Syndicate. Panel Syndicate uses “pay-what-you-want” pricing. It’s a pricing structure you’ve probably encountered somewhere on the internet by this point. In case you’ve lived a life free of Humble Bundles, the Pay What You Want approach is exactly what it says on the tin – you decide what you want to pay. The absence of printing and distribution costs and the self-published approach they’ve taken means that what you do opt to pay goes directly to the people who created this book.

Brian K. Vaughn is the writer of some truly amazing comics, including Ex-Machina, Y: The Last Man, the first arc of Marvel’s Runaways, and Saga (available via those Amazon affiliate links, or your LCS of choice). He’s also doing a signing at Aw Yeah Comics! in Muncie this April. I already recommended his run on Runaways back when I talked about A-Force, and Saga is a book I’ll tell basically anyone to read. With Private Eye, Vaughn accomplishes something similar to what he pulls off in Saga; he creates a full and very different world without the dialogue feeling stilted or fussed-over. If pressed, I’d say he does it slightly better in Saga. Saga exists in a world entirely separate from ours. It has its own history, its own cultural touchstones. Here, the references to How Things Once Were occasionally create stumbling blocks. It’s by no means enough to majorly detract book – it can just feel kind of self-consciously winking in a way that tends to take me out of things for a moment. 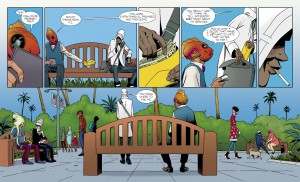 The full and immersive nature of the world of Private Eye also owes a lot to Marcos Martin’s art. His establishing shots always manage to pack an insane level of gorgeous detail, but the character design is what speaks to me even more. There’s a hefty scoop of future-past in the costuming – the Press are all dressed like they tumbled out of 1938 and the villain’s henchmen are basically in Rocketeer cosplay, but there are also people whose masks are sparkly holograms. The masks are really the most important part. Before the first issue is over, you watch someone wearing a tiger head threaten someone with an octopus on his face. A whole octopus. It’s blue. You watch this happen, and Martin’s art is such that this scene works. That sounds like faint praise but it’s really not – it would be so easy for these masks to look distractingly silly. Instead they feel natural. They serve as an extension of the character wearing them. Muntsa Vincente’s colors deserve a mention as well. Her palette is striking but warm, and she gives the pages life. I won’t pretend to have half of the understanding of color necessary to give her the shout out she deserves, so I’ll just tell you to do yourself a favor and check out her website.

Now the bad news: this all-together lovely comic is basically over. As of right now, nine issues have been released. This is planned as a ten-issue story. So you can head to Panel Syndicate and just…go to town. Story-binge just like you will when Daredevil drops on Netflix in April. But then you’ll have to wait for the final installment. And I’m not sure how long. However, if it’s more than a month you have my permission to be deeply dramatic about it. Take to your bed! Insist that your constitution can only tolerate plain crackers! Look out the window and sigh! I will fully support you.

From a distance though.

Like, we won’t talk about it. But you’ll know I get you.

Last week I also grabbed Silk #1, but I didn’t list it because I forgot to add it to my pull so I forgot it was out.

First I was like: Pulllist.comixology.com
Then I was all: Comic Shop Locator
So then I just: Downtown Comics
But I guess I could: Comixology