When it comes to choosing comics, I have a major weakness for certain character types. I like magic users, I like teen detectives, I like overly-energetic balls of friendly chaos.

But the one that matters right now is my love of rocker girls.

I never really managed the bad-ass alt girl aesthetic. My high school CD player was a lot of Ani DiFranco, Garbage,  and NIN (I had a lot of emotions). My high school wardrobe was mostly Pacific Sunwear. 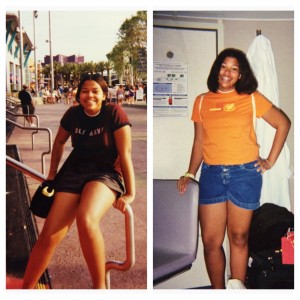 Now that you’ve seen me with braces, you’ve officially entered my circle of trust.

But the me that lives in my heart had (has) green hair, huge boots, and a t-shirt that has words I’m not supposed to use on this blog scribbled on it in sharpie.

That version of me (and also the actual me) is having a big week, comics-wise. Double-sized entry big.

Part One – August gets swerval

Hopeless Savages is back.

…I have a lot of emotions about this comic. 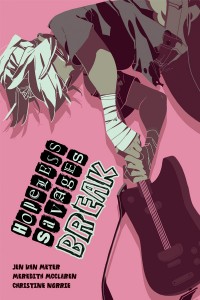 Oni Press announced this week that Jen Van Meter’s Hopeless Savages will return this August with “Break”. This graphic novel will find Zero in college and touring with her band, The Dusted Bunnies. I have been waiting years for this news.

For those who aren’t familiar, I’ll give you a quick rundown. I think I also talk about this a bit in some upcoming episode of the podcast, but I’m not sure how through I was. It’s my past/your future and I don’t remember what I did/will say.

Hopeless Savages is a comic former punk rock icons Dirk Hopeless and Nikki Savage (97% sure I got it backwards on the podcast), and their kids Rat Bastard, Arsenal Fierce, Twitch Strummer, and Skank Zero. Skank Zero is the youngest, usually the perspective character, and the song my heart sings when it dares to wish. She’s bold, she makes messes of situations, and she doesn’t care what you think of her (except when she super does). The comic premiered in 2001 with a four issue mini-series, where Nikki and Dirk get kidnapped and Zero has to rally her big siblings to save them. This was followed by two more minis – Hopeless Savages: Ground Zero (2002), and Too Much Hopeless Savages (2003). Hopeless Savages B Sides, a one-shot revealing how Zero’s band came to be came out in 2005, and then there was nothing until 2010, when the “Greatest Hits” TPB came out. That looks to be the only version in print right now, but it has EVERYTHING, so consider clicking that affiliate link and picking it up.

This story is just really fun. Van Meter’s righting has always made this family feel whole and loving and real. The characters all have their moments of weakness and uncertainty, but they also have their strengths. Zero in particular has always had this great balance between being an utterly self-assured girl who doesn’t let anything get in her way and someone who gets hurt by peoples assumptions and genuinely takes things to heart.

Did I already say I have a lot of emotions about these books? Because I do. These were my gateway back into comics. I found this at a point that I wasn’t really reading any comics anymore, and I fell in love with them. A couple of years ago, I reread them with that specific trepidation that comes from revisiting stuff that mattered to you when you were younger. You get hit with that fear that it won’t hold up and that knowing that will spoil the sentimental significance.

Hopeless Savages holds up. Assume that you’ll be hearing from me about this again in August, if not sooner.

And seriously – read it.

Oh – and while we’re talking Oni, did you know they’re taking open submissions in May? So if you’ve got a pitch…pitch it.

Remember earlier, when we talked about revisiting media from your youth and seeing if it holds up?

Don’t get me wrong- it’s fantastic. I will, with minimal provocation, delight crowds with BOTH theme songs. It’s just not remotely good. Which is probably why it’s making a comeback. A sentimental favorite with a lot of room for improvement is the right sort of thing to remake/revisit. So Jerrica and crew are getting a live-action movie in October, and a comic book on sale starting today. 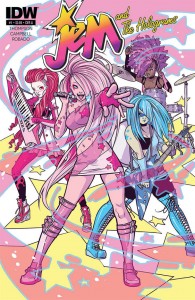 If the nostalgia factor is there for you, you were probably already planning on buying this today. But even if you aren’t still a little sad about how rough Stormer had it (Pizzazz is so mean to her!), give this book a shot.

Artist Sophie Campbell draws the world’s cutest girls and can always be relied upon to have diverse body types represented. The redesigns for these characters are over-the-top glam magic, which is exactly what I want from a Jem comic. M. Victoria Robado’s colors emphasize that, with pinks, blues, and purples dominating the palette when the band is together and functioning.

In this issue Thompson mainly focused on Jerrica and her sister Kimber, which I appreciate. Jem is more or less a costume that Jerrica wears – it’s nice to open with an insight into why. 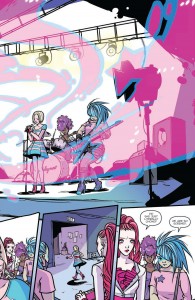 There’s a reason it’s not Jerrica and the Holograms, folks

I’m sure we’ll get more of a sense of Aja and Shana is coming issues, and based on their character bios, I’m looking forward to it. Also, next month: The Misfits. The most needlessly hateful, insistently criminal rock band to ever appear in a children’s cartoon.

Seriously. I re-watched some episodes on Netflix a while back – do you know how many times Pizzazz’s plan is essentially attempted Hologram murder? A lot of times. Maybe even most of the times. She’s basically a super villain.

And while we’re talking about things you realize when re-watching, isn’t Rio the WORST boyfriend? I know Jem and Jerrica are the same person, but HE didn’t.

Jerrica. Girl. You’re an international rock star/music mogul/philanthropist. You can do better.

Don’t know where to find your comics?

I got your back.

An advance copy of Jem & The Holograms #1 was provided to Geeking In Indiana by IDW. We weren’t provided any compensation beyond that, and the opinions posted above are my own.