Hey out there in TV Land!

(Note: I am constructing a brief but rich fictional world that is, in effect, a 90s game show. I – and in fact Team Geeking as a whole – apologize for any confusion this narrative tapestry may have caused.)

Guess what it’s time for?

The game where we obsessively fret about the number of comics we’re reading and the winner gets…I don’t know. Fewer comics? More comics? A third, joke-based thing?

Last week I was fretting about my pull on Twitter, and my friend Claire said that  she only pulls comics if she loves it so much that she wishes it was weekly.

That’s a really good way to go about it. That is not my method. I will keep pulling a book if: 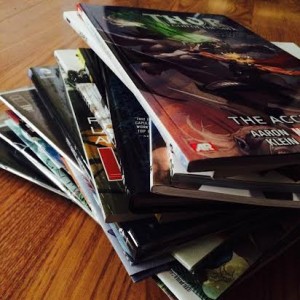 It’s my “Unread Ongoings Currently On My Pull List” pile. It doesn’t include impulse-buy trades, “Project” purchases (as in “I’m going to make a project out of reading Ultimate Spider-Man), the X-Statix omnibus, the bag of minis I bought at CAKE last year, a few long boxes of hand-me-down back issues…you probably get the point. Also, if I REALLY stare into that abyss of irresponsible spending I will freak out.

I was already planning to make some cuts, then Secret Wars started. There are soooo many Secret Wars books I have to read. Noelle Stevenson is writing Runaways. Magik is in at least two books. There’s a romance anthology. A-Force.

But money is decidedly finite, so now cuts are a must. I love comics, but I also want to go out for breakfast sometimes. And there are three different dagger necklaces on Hey Chickadee. Toward that end, here are my tips for trimming your pull list:

…That may have gotten a little less broadly applicable toward the end. But still – there’s a path to trimming your pull list. And if you want to test these tips, you can go ahead and figure out what I should cut from my list.

I’d do it myself, but I think this summer I’m going to try reading some Flash, so I need to go research a list of essential arcs.

…how did this happen?