I’m a big proponent of just diving into comics. Find the most recent #1, or the start of an arc, and just fling yourself into it. It’s what I recommend to everyone. But it’s a “do as I say, not as I do” sort of recommendation.

Because it’s not what I do.  Not remotely.

I like back-story. I want to know everything. Context clues are great! You know what’s better? Context. As much as I can feasibly obtain. A few years ago someone (by which I mean the internet, by which I mean tumblr) told me that Avengers Academy was a great standalone book. And it was! You’ve got characters that have only been recently introduced, the book neatly runs you though anything you may have missed by skipping Avengers Initiative (which is enjoyable but sort of messed up), and Marvel teen/school books are always my favorites. It stays mostly above the main-continuity fray, with just the occasional mentions of “what happened to Janet” or Steve Rogers just going by “Steve” instead of Captain America.

My completely measured response to these mild allusions was to read ten years worth of Avengers books in about 6 months. In case you were wondering, the Disassembled/Civil War/Secret Invasion/Siege chain of events gets…wearying when you’re buying a new trade every couple of weeks. So I started reading Thor as a palate cleanser.

…I mean, until Siege swooped down to mess up all of my Asgardia, OK happiness.

This is how I approach things. This is why I periodically have to have a very difficult discussion with myself regarding the size of my to-read pile. And then I still contemplate what comics projects I’m going to undertake next.

I decided that young Miles Morales fella was a character I need to check out. So I’m working my way through EVERY ISSUE of Ultimate Spider-man. Peter isn’t going to die for another 8 years worth of comics, but I feel I should get a full understanding of Ultimate Gwen before I get to Miles. Also, I should probably read at least some Ultimates, because I think Peter dies in a crossover event. Or maybe that’s just when he has to pretend to die? I saw something about this somewhere.

This is an absurd approach. Just pick up the first #1 that looks appealing and go with the flow. But if you can’t – if you don’t really “go with” flows, let me introduce you to The Completely Rational Bri Rudd Method for Trying to Read All of the Comics Because There’s Been Some Cool Stuff and You Don’t Want to Miss Anything: 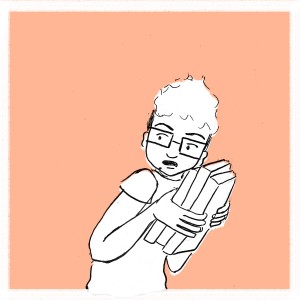 4) Read the 3 million tabs you now have open.

I’m only half-joking. Most of my DC knowledge comes from watching something on TV and deciding that I need to understand everything that led up to the animated movie I got from a Redbox. My knowledge isn’t comprehensive – I’ve never cared about Superman, so I still confuse Doomsday (spiky Sam Witwer) with Darkseid (mini-skirt space guy), and I can never seem to keep Infinite Crisis and Crisis on Infinite Earths straight. I can, however, give a pretty passable rundown of Robins 1-5. And really, the Crisis/Crisis-mix-up feels like it’s more a DC-event-naming failing than a personal one.

When I checked out of X-books for a good 10 years, this method helped me fill in gaps and figure out how to catch up.  When I tackled Avengers, it helped me figure out what I could skip. When I watched the Flashpoint movie, it helped me realize that I don’t want to read Flashpoint right now because it seems like a super-bummer.

I guess I should also point out that you can just…talk to people. Go to your LCS, or ask internet people for comics recommendations. Plus, comics people can point you to comics podcasts (I just found out about Tom vs. Comics and I’m very excited about it), which make it even easier to learn stuff.

Then you find out about even more comics!

And want to read even more comics!

And don’t get to because time is finite and you got stuff to do!

And then you feel a little bummed out!

But, whatever, you’ll get to Excalibur eventually!

Or just be a reasonable human being and accept that there is a LIFETIME’S WORTH of comics and you can’t read every good/significant issue, so just chill!

Chill for me, because I cannot. Now, it’s time for…

All of the links up there are Amazon affiliate links. Just so you know.