Let’s say there’s a giant legion of demons is about to surge through a dimensional wall and destroy the ENTIRE WORLD. Whatever shall you do?!?! 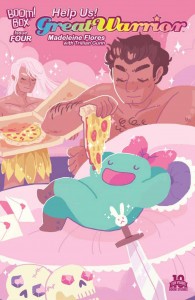 I already pre-raved about the print version of Help Us! Great Warrior earlier this year when I talked about Boom! Box: Mix Tape. Issue four of Madeleine Flores’ comic (with Trillian Gunn providing colors) is out this week, and the series so far is so much fun.

Help Us! Great Warrior began as a webcomic comprised of one page stories about the adventures of Great Warrior. She’s a brave hero of song and legend who loves herself about as much as she loves defeating evil and protecting the innocent. She’s also pretty into pizza, jewelry (with or without magic powers), and weapons. She’s my potato-shaped, green-skinned role model. 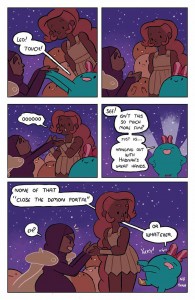 For the Boom!Box mini-series, Flores tells an ongoing story – the whole “demon dimension” thing I mentioned earlier – with a strip from the web run at the end of each issue. The story stays cute and fun while still managing to effectively raise the stakes and do a lot of world building. There’s a great contrast in the art, because Great Warrior is a bean with limbs going toe-to-toe with giant winged demons with eyes like burning coals. Flores’ establishing shots also reinforce this . There are forests, and crystal caves, and bustling towns. And in the middle of it, looking unlike anyone but her fellow villagers, is this adorable ball with a giant bow on her head. She’s cute, and she stays cute while she CRUSHES ALL WHO WRONG HER. The writing jumps back and forth across that line, too. The book threatens you with hell dimensions, then takes a moment for GW (and her best friend/co-hero, Leo) to marvel over how smooth the High Chancellor’s hands are. Plus, you learn that Great Warrior has a DeepDarkSecret! And at the end of issue three, you get the BIG REVEAL!

To be clear, my caps here are because I liked the whole thing and I’m excited to see what happens next. I know that characters with SECRETS can be a bit of a dice roll in any media. Flores isn’t ever heavy-handed, nor does she needlessly convolute the plot to delay the reveal. She builds to it in such a way that feels organic and efficient. Plus, even if you have a sense of where she’s headed, there’s still a bit of surprise. That’s why I’m not including any of preview pages from this week’s issue – I want you to read the previous three without seeing it. And I don’t want to see it until I have the whole issue in front of me.

And there’s another bit of awesomeness to this book! You like diversity and representation in comic books, right? Of course you do! Well, Help Us! Great Warrior has three lead characters, all of whom are women and two of whom are women of color. In creating Hadiyah (the long-suffering High Chancellor), Flores took the time to reach out online and find a name that an actual Muslim woman would have. GW’s co-hero, Leo, is a trans woman, and that’s established about her from issue one (when she let’s Hadiyah know that she is listed on the Scroll of Heroes as “Samson the Magnificent” and Hadiyah updates the list).

Help Us! Great Warrior is a fantastic comic, and it’s good for all-ages (to my mind, at least – YMMV on the whole demon thing). You can buy #1-4 at your LCS, or grab them on Comixology if your shop is sold out. Talking about Leo has reminded me that she’s in one of my favorite Great Warrior strips, so I’m including it here for you to enjoy: 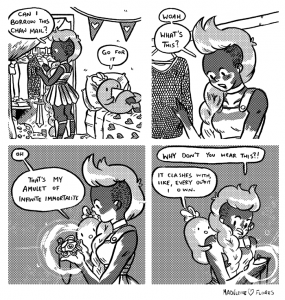