More specifically, let’s talk about the overwhelmingly large body of work John Allison has generated over the years.

I’m not afraid of fifty-plus years of X-Men continuity, but seventeen years of Tackleford initially felt too daunting to attempt. With superhero books, creative teams are coming and going all the time. Even when all of the continuity technically counts, it doesn’t. People are working on their own narrative, and playing off of the aspects of the backstory that serve that narrative. Bobbins, Scary-Go-Round, and Bad Machinery (and now Space is the Place) are the work of one cartoonist, operating within one story-world. I didn’t know about him until around five years ago and, being generally fretful and particular, wanted to start at the beginning. The beginning of a narrative that began in 1998.

Do not do that thing. It is a dumb thing to try. Trying that dumb thing resulted in me falling off of reading Allison for another couple of years. Then, I started in a much smarter way – I bought volume 1 of the print edition of Bad Machinery (oooh…affiliate link). I’m missing things this way. I know that. And it irks me. But only because I am…how I am. 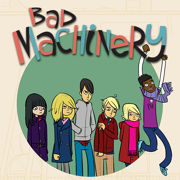 Several of the shambling 20-somethings that are central to Scary-Go-Round are present at the edges of Bad Machinery, but the latter won’t fall flat just because you aren’t familiar with the former. Bad Machinery functions perfectly well on its own. Plus it’s a sharp, funny comic about teen detectives which is one of my favorite genres. There are three volumes (one per case) currently available in print, with a fourth soon to come. There are nine cases all together, so at some point it may behoove you (and me) to switch to reading online. I love the print versions- they’re these gratifyingly huge books – but I’m six cases behind on this particular clutch of meddling kids and it’s bugging me.

Why is it bugging me? Because of the previously established, vaguely compulsive need to know the whole story!

And because Allison has a new comic. 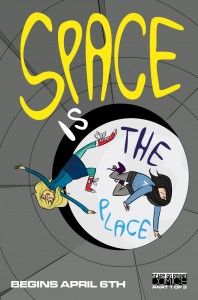 Space is the Place takes place after the end of Bad Machinery and centers on those characters. Which is lovely for me because Charlotte Grote is becoming one of my favorite characters in comics. As I mentioned already, I’m six cases behind on Bad Machinery, but that doesn’t harm my ability to read Space is the Place. The characters have clearly grown, but are still recognizably the ones I’ve read in Allison’s previous comic. It just started in April, so it’s a completely manageable read. It’s also well-paced enough that you get oriented to the world you’re dropped into without the story dragging through exposition.

But let’s say, just for funsies, that you’re still not sure about jumping onto a comics train that’s been rolling for almost 20 years.

I still got you. Because Giant Days. 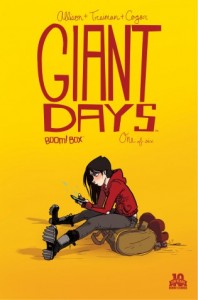 I have some major love for Giant Days. It’s a story about three college freshmen with a fantastic ability to leave destruction in their wake. As with John Allison’s other comics, the characters feel legitimately young and clever. They never seem overly stylized or precocious – the dialogue is always well-thought out without seeming self-consciously clever. The first volume is a three-issue mini, written and drawn by Allison and released in 2011. You can buy print copies via Topatoco or get it digitally at Comixology. The second volume is currently being published by Boom! and has Lissa Treiman on art. Originally slated to be a 6-issue mini, they got upgraded to 12 issues. You can check your local shop, or catch up via Comixology.