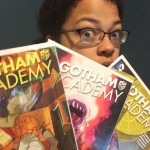 Did you know that comic shops are super weird?!?!

That’s way less punchy though, so hopefully you’ll forgive me for cutting it down. But yeah, comic shops work kind of differently from a lot of other types of retail, and it can impact how your experience at a comic shop works. First, I’m going to (quickly, loosely) cover how comic shop ordering works, then we’ll go over what that means for you.

Comic shops, in general, get their comics through a company called Diamond. Some shops may also sell independently distributed books, but that’s going to vary from shop to shop. For Diamond, books will solicit a couple of months in advance, those solicits are viewable through Previews (either the website or the physical catalog), where the order code is also provided. Shops order enough to fill any pull requests they have on file, as well as however many they want for the store. If the demand exceeds the size of the print run, they may not get all of that order. There are also some items – like some variant covers – that have other ordering constraints. We’re not wading into that particular quagmire today because it’s sort of a whole big thing. Let’s leave variant covers at this: if you want one, ask your shop as early as possible and be aware that you may  not get it or you may have to pay extra.

Now here’s the sort of weird part – the sales numbers you read about for a book are based on what the shop orders, not what actually sells on a customer level. That’s because comic shops are stuck with whatever comics they buy. So even if your LCS still has 50 copies of Convergence: Speed Force #2 sitting on their shelves, Diamond can say they’re sold. That makes it unlikely for stores to order big on anything that doesn’t seem like a pretty sure bet. Which means big books tend to stay big, small books can end up in a self-perpetuating cycle. They don’t sell much, so stores can’t necessarily risk ordering many, so they sell out, so they can’t really find a new audience, so they don’t sell much.

There’s this whole extra element of this issue to be found in how companies with a large enough market share can use loss-leader tactics and ordering incentives to goose their sales numbers, but I’m not going into that because:

1) I don’t have the wherewithal to research and cover it with the thoroughness it necessitates while 90% of my life is in boxes, and

Let’s move on to What This Means For You:

Mostly, it means that pre-ordering and pulling the books that you want is a very good idea.

The obvious reason is that it means that your book will be waiting for you when you come in – no more weeping at the empty spot where Giant Days once was.  It also means that the store has a better sense of how many copies they’ll need. When you do find yourself staring at blank shelf space, it can be because the person who handles the ordering didn’t realize how popular the book would be. Without pre-orders, they may base that on popularity of the creators, or of the characters (for non-creator-owned books), or of similar books. Because of how early things solicit, they could be ordering for issue four before they can actually base their numbers on how many copies they’re selling of that book. With pre-orders, the store knows there’s an audience that’s excited about the book in advance, so they may feel more assured that additional copies on the shelf will move, too.

So how do you pre-order books? The actual specifics of the pull list system can vary from store to store. Some may initially want you to pre-pay for things your order, some may have a minimum number of books they require you to reach before you can start a pull list. Across the board, though, once a book has been solicited (appeared in Previews and been given a code in the Diamond system) you should be able to request it. Note that books are often announced well before they actually solicit, so you may not be able to order it when you first hear about it. If it’s a book that’s already out (single issue, trade, or graphic novel) your shop should still be able to get it for you if it’s still in print – you’ll just need to ask them. If it’s out of print, you may have to decide if it’s worth it to you to pay above cover price.

If nothing else, the main takeaway here is this: if you don’t see the book you want, go ask about it. It may spare you a whole bunch of searching, and it lets the shop know that this is a book people are interested in. Then more people read the book. And maybe a musical number happens?

Also, unrelated to anything but TOMORROW IS MY BIRTHDAY!