I think I’ve already opened with a “sits down backwards in chair/’let’s have a rap session'” bit at some point. Which is a bummer, because 90s jokes are my go-to distancing tactic when I want to talk about my feeeeeeeeelings.

Because I have a theory

Okay, see why I wanted an ironic construct with which to distance myself? But it’s pertinent.

Because I think that Illyana Rasputin (aka Magik) is, as a superhero, a really effective analogue for depression. And it may be totally accidental. It may also be me projecting. Don’t care, though – I stand by it.

A lot of anti-hero characters don’t really click with me. In hero comics, it’s a character type I associate with “They killed my wife, dammit!” backstories, guns, revenge plots, dirty bars, rain. Lots of rain. Or maybe just too-cool-for-feelings detached badassery. And also still guns. In any medium, it reminds me of characters who are awful to people and aren’t sorry about it and that’s supposed to be impressive, or cool, or a reflection of their cynical outlook or whatever. I’m not into it. But a character who wants to be the sunny, friendly hero but sees no way to get there? That’s way more interesting to me. 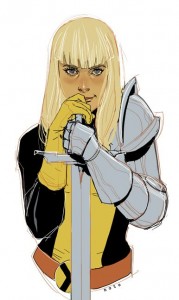 Illyana Rasputin is a Marvel Comics character. She’s the younger sister of Colossus, and entered the comics around the same time he did. At the time, he was a teenager and she was about 6. Things are about to get comics-y, so strap in.

Illyana got pulled into limbo (one of the many demon-filled hell dimensions that you can visit on your tour of the 616) by Belasco. He wanted to corrupt her pure, innocent soul to make bloodstones for an amulet of power because these are the sort of things you do when you’re a hell boss. The X-Men followed immediately behind her, had to contend with dead or evil alternate versions of themselves, and saved the day!

They portaled away, but Belasco grabbed wee baby Illyana again at the last second. That’s okay though, because she landed in the X-mansion mere moments behind them. Only Illyana was about 13, now. She’d spent the intervening years having bits of her soul stolen and corrupted, being trained in magic, becoming a sorceress, gaining the power of teleportation, defeating Belasco, and becoming the Queen of Limbo. The Illyana that comes back has a weapon called the Soul Sword that works on enchantments/demon stuff/etc. She has also demon form. Called Darkchylde. Which, yeah. I know. But it was the 80s, so let’s be chill about it. 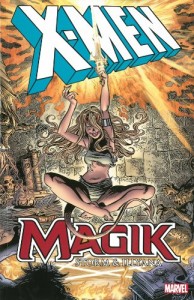 We don’t find out any of this when she first reappears – the hints that she’s a mutant and a sorceress are doled out gradually at first. By the time we get the full story (in the Magick: Storm and Illyana miniseries, which I have some love for) Illyana has become a member of the New Mutants.

Later there’s more. Her Darkchylde persona takes over a few different times, there’s this thing where demons take over New York, she dies, she un-dies, gets all demony again, she corrupts some of the soul of another young mutant.

It’s a lot of stuff. And a lot of it centers on the struggle that’s been at Illyana’s core since Chris Claremont and John Buscema showed the reader what in means to spend your formative years in a demon-infested hell dimension.

Illyana’s central struggle for much of New Mutants (and plenty of stories beyond that) is the contrast between her desire to be a normal kid and her fear that she never can be. She can’t use her powers without teleporting through Limbo, which isn’t always safe for her. It’s actually pretty hard to hold on to leadership over demon hordes when you’re not yet at drinking age.  Plus, using her powers can bring out the Darkchylde persona. Even on a team of mutants, being the one with horns can make you stand out.

She has good moments, too, but the moments that stand out for her are the ones where she frightens herself or frightens those around her. Everything else is an act she’s trying to put on. And it becomes self-perpetuating. She sees that she freaks people out, so she closes off. Then when something happens, she doesn’t ask for the help she needs. She either tries to trick people into doing what she needs them to, or she takes it on by herself. Either way, things tend to go poorly. And possibly, it ends with people being even more afraid of her.

Even when she tries to reach out, she does it from such a place of frightened mistrust that she can end up hurting people. In a recent (in the grand scope of things, so less than 5 years ago) arc by Kieron Gillen, Colossus was stuck being Juggernaut and Illyana cured him. Eventually. But she told him that she could have done it immediately. She didn’t because she wanted him to know what it was like to continually have to fight back darkness within yourself. And so he would stop seeing her as the sweet little sister who was taken into Limbo and see the monster she knew herself to be. He swore to never speak to her again.

She considers herself proven right – she’s shattering relationships to prove that she’s broken and alone. And the cycle begins again.

Books I’m Picking Up This Week:
Jem and the Holograms #6
Silk #7
Toil and Trouble #1