No Mercy is dope. 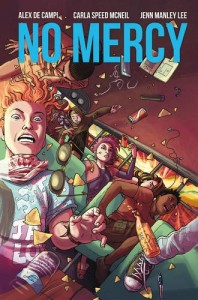 It’s written by Alex de Campi with art by Carla Speed McNeil, and it has four issues/one trade paperback available for sale. It’s about a group of high school students on a trip out of the country. You can probably guess from the cover that things don’t go all that well. There are drugs. And explosions. And wolves. There are all sorts of internal conflicts between the students that come to  a head pretty quickly once the pressure is on. It’s intense and dark, but not needlessly so. Every action, every quick glare, feels purposeful. It’s a great read.

I’m going to be honest, though -there’s a separate reason I’m recommending it right now. Comics can get wearying. Anything can, really. Any industry, any fandom, any group has it’s problems if you get close enough to see it. And with comics, at the moment, I’m close enough to see some of it. There’s in-fighting, there’s sniping, and there are some MAJOR issues that run rampant throughout. I see these things play out knowing that all I’m getting is the surface of it. There are veins of exclusion, harassment, and dirty dealings running though all sorts of sectors of the industry.

There are also some wonderful people. People that I have to believe are the future of comics. People who honestly care about not furthering a toxic environment. People who don’t treat people bringing up real issues the same way they treat nit-picky trolls. People who respect their collaborators and their peers. And, in ever-increasing number, there are those among them who not only openly reject this sort of behavior but shine a light on it. Doing that can cost them options, cost them opportunities. Alex de Campi is one of those people. She’s tired of the garbage, and it is beautiful. She’s open and honest about what this industry can do to people, and that’s so important. She’s not the only one – Tess Fowler, Julia Wertz, and Janelle Asselin spring to mind, but there are others.

It’s saddening to read it all, but it’s important. Because none of the things they talk about are new problems. You have people releasing thoroughly researched stories of serial harassers who are working to this day. Talking about the places that won’t hire them because they raised an issue about someone’s behavior. People have learned to suffer in silence, or left the industry all-together, or been blacklisted out of careers. And these aren’t just the problems of major corporate comics – indies have them, too.

And it, honest to god, makes me sad. But I know that me sitting here having feelings doesn’t, you know, do anything.

So instead, I’m going to suggest that you go read the ever-so-enjoyable No Mercy. Check out Rat Queens. Get all the issues of Fresh Romance. Read some of what Oni Press is putting out. Iron Circus Comics, too. I’m not asserting that any of these examples are perfect – nobody is. But they are people who publicly commit to doing things to make the industry better. This is by no means a comprehensive list, either. There are companies and creators (some working with publishers, some doing it on their own) that are doing things right, and I want them to succeed. Basically, when you see stand-up people putting out good work and bringing this industry forward? Support them. Tell your friends about them. Let that be what comics is.