It should come as a surprise to no one that I’m a sucker for “pilot” costumes from Star Wars. Here on the blog, I’ve already written about my work on the Resistance Pilot Costume from The Last Jedi, and the A-Wing Pilot costume from Return of the Jedi (links to both can be found on the Costume Initiative page). Over ten years before I did either of these, though, I did the X-Wing Pilot costume from A New Hope, as pictured right there, at the beginning of the post.

This costume was made back in 2001, when your references were VHS tapes, magazine pictures, the West End RPG books, and the action figures. I put it together for San Diego Comic Con, and I worked with what I had available. The orange suit was a flight suit I purchased from Supply Sgt. in Burbank (probably), removing some pockets and using that fabric to hand sew other pockets on (which helps explain how wonky that tool holder on my left arm is). The gloves were some brown leather gloves that were found at M&I Surplus in Pomona, CA which we cut the strap off of, and dyed black. The helmet, chest box, and white vest were all from an old dealer called Richie’s Armor. The harness and belt were made out of a seat belt I cut out of a totaled car at a Pick A Part in Ontario, CA, the arm tools made out of pipe and washers, the “compad” (not pictured) was bits of balsa on plastic, and the leg flares (not pictured) were wooden dowels in a holder made out of black spandex. Even for the time, it was no means perfect, but in a sea of white Stormtrooper armor, I definitely stood out. In fact, I stood out well enough that the guys from American Movie, there covering the convention for Late Night with David Letterman, interviewed me for the show. Fun note: a quick shot of me in costume made it into the opening of their bit when it aired a few weeks later. Anyway, while this costume was then approved for The Rebel Legion, over the past almost twenty years, new reference and better work has made it out-of-date, and something we chuckle at whenever we look at it.

Fast forward to the current day. Almost every piece of the costume, with the exception of the arm tools and the boots (which are the same as the Rebel Fleet Trooper’s), are pretty much presumed missing or destroyed (don’t ask). For most of this, I’m not too concerned. However, the helmet and the chest box were both still something that could have been salvaged, but alas. Still, I want to have this costume in my collection again, so I’ve started planning how I’m getting it back together. 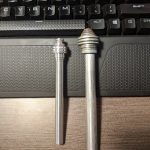 My new plan isn’t just putting the costume back together, but also to get the items to make a Snowspeeder Pilot costume, as well, which uses many of the pieces of the X-Wing Pilot costume. Off the top of my head, pieces that are used for both are the flight suit, the helmet, the harness and belt, the chest box, the vest (though, I think it’s worn backwards), and the leg flares. Pieces I’ll need specifically for the X-Wing are the connection for the chest box tube to the suit, gloves, arm tools and compad on the left arm, and black boots. Specific for the Snowspeeder will be grey gloves, the jacket, a tan cap/hood to go under the helmet, and the grey boots. Now, I could search through a million 3D Printing sites to try to find this stuff, or I could just go through people who have established themselves in making pieces of quality over the past lord knows how many years, and get those pieces so I don’t have to reinvent the wheel.

So, here’s a rundown of my priorities…

First, I’m going to focus on the X-Wing Pilot, since the Snowspeeder is all add-ons and replacements. As I mentioned, I already have the boots, and I have new arm tools(pictured, with the machined on the left, and my old stack of washers on the right), thanks to Droidboy (Gregg Nowling) and Elvis Trooper (Ken Tarleton). Everything else? Honestly, it’ll probably be from a variety of Etsy dealers. I haven’t figured this one out as well as I’ve figured out the Rebel Fleet Trooper, as of yet. I’m fairly certain I’m going to be dropping a chunk of change to Etsy seller DHPFX (link) for the chest box, the helmet in kit form, and the compad. I’ve talked someone who’s no longer doing orange flight suits into making me an orange flight suit, and I’m probably going to go through Wampa Wear (link) for the gloves, since I was happy with the gloves I received for my Resistance Pilot Costume through them. For the rest of the items (vest, harness, belt, flare holder and flares) I still need to do some research, because there seems to be many of them available from many different vendors. 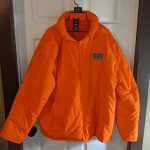 For the Snowspeeder stuff, I’ve already got the jacket, thanks to Phil, who picked one up for me at Star Wars Galaxy’s Edge down in Orlando, back right before the pandemic started. The gloves will probably be from the aforementioned Wampa Wear, and the greeblie that goes on the gloves will probably be from the aforementioned DHPFX. The boots, I’m keeping an eye on some Facebook groups, to see who can make a size 12 boot, because the ones other people have been using seem to run on the small side. Finally, the cap needs some more research, as well.

This pilot costume is not as high priority for me as the Rebel Fleet Trooper is, but it’s still something I’m trying to keep at the top of my mind. If I’m thinking, “I need to save $300 for a compad, chest box, and helmet kit,” then I’m going to be less inclined to impulse buy a game on Steam or Switch, or get that cool looking Plasma Series wand from Ghostbusters Afterlife for $100. Like I said, this is more of a “buy the parts” costume than a “make it from scratch” costume, but I’ll still be keeping track whenever I get something new, and the helmet will be a kit, so there’s something to build over on the building Instagram feed (link)!

With that, I’ll see you all next week. Patrons, look for your update on Sunday!
Tony