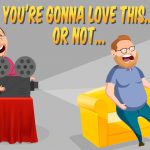 Welcome to Year Two of You’re Gonna Love This… or Not…! For those who have just joined us, this podcast features Matt, who loves watching bad movies in his basement, and Josh, who loves giving Matt grief for his love of bad movies. Every month, Matt is going to bring Josh down to his Subterranean Fun Pit (aka, his basement) and show him one of his favorite bad movies, hoping to find one Josh loves, or at least likes a little bit. On occasion, they bring in guests.

This month, we are currently still in the depths of a pandemic and quarantine, the one that was spoken about in Y2E04. Due to this, and the fact that not every YGLToN cast member has reliable internet, we were not able to get into the studio to record an episode. So, after talking with Matt, we decided to release the “lost” episode of YGLToN. The episode was was supposed to be released in April of 2019, instead of The Race for the Yankee Zephyr. The episode you’ve heard the guys speak of never airing, though they never dismissed the idea that it could be a perk for a Patreon down the line. Yet, thanks to a pandemic, here it is.

This was a short episode, clocking in at under twenty five minutes with everything added to it, but it’s an amusing listen. So sit back, put on your headphones, and let these two chuckleheads fill your earhold for about half an hour.

And if you’re in public? Make sure you’re wearing a gawd damn mask.

NOTE: You’re Gonna Love This… or Not… contains harsh language, and reviews R-rated films, so it is not suitable for younger listeners. Worse, it contains spoilers.

All notes for this episode can be found at http://geekinginindiana.com/yglton-y2e05/

Thank you all for listening! As always, be excellent to each other, and to yourselves! I’ll see you all soon!