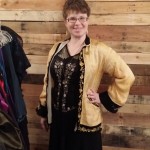 Madame Belle Breeze, one of the presenters. Sadly, Kat Alyst had to leave before I got a picture of her costume.

As I mentioned last Thursday, I had the opportunity to attend a workshop, put on by members of Circle City Aerodrome, covering Steampunk Costuming on a Thrift Store Budget. This workshop, put on by Madame Belle Breeze and Kat Alyst, went over the basics of how to make a great costume using finds from thrift stores. This was an excellent presentation that included passing around costume pieces, demonstrations on how to use different types of clothing to achieve your desired effect, and tips on how to haunt the shops for what you need. While their information was geared towards Steampunk costuming, it was also good for many of the other types of costuming that’s out there, as well. So, let’s take a look at what was presented, at least how I understood it.

First things first, you have to think about your character. In the case of Steampunk, what is their story? What do they do? One thing that was stress was the character’s “silhouette”, or how they look. Women’s clothing, and to some extent, men’s clothing, is cut different now than they used to be.  For example, men used to wear their pants higher, so the cuts of vests and suit coats ended higher up the sides than they do now. For women, wearing a corset is almost the norm, and for a Madame or Lady, flared skirts should be your look, or for a laborer/tinkerer, pants. Keeping this silhouette in mind as you put together your costume will help you look like it belongs, and it’s not just a group of things you threw together. Even though, part of the charm is it’s almost something that looks thrown together. Your costume is a walking collage, and it tells your character’s story. Plus, you want to make sure you aren’t fitting any stereotypes, and make sure everything has a purpose! Is there actually a reason for your character to be wearing goggles, or are you just putting them on because you think that’s what you’re supposed to do? Does your character really need a corset, or would a lady’s cut vest be a much better choice? 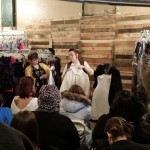 Showing off men’s collars, Belle on the left, and Kat on the right.

Once you have your character mapped out in your head, or on paper, or even sketched out in your sketch book, the next thing to do is start finding parts. One thing that was pointed out was, when working on something like this, you have a pool of three things to choose from: money, time, and effort. Out of those three, you get to choose two. If you don’t want to put forth effort, it’s going to take money and time. If you’ve run out of time, it’s going to take money and effort to get your costume done. So, if you’re like me and want to save as much money as possible, you need to put time and effort into your costume. This definitely comes into play with thrift store costuming. First, it will take time. Value World, Goodwill, or Salvation Army won’t have what you’re looking for the fist time you visit, or even the first month. You’re going to want to be persistent, figure out a time of the week that you’re going to visit, and just make the rounds. Another thing you’re going to want to do is not just look for, say, a vest. Sure, you might get lucky and find the perfect piece, but remember, you will also need to put in some effort. Look at jackets, look at suits, look at whatever you might be able to tear apart and put back together into what you want. Is a dress hideous, but it has bead work that you would love to add to your bodice? That dress is five bucks, so buy it, carefully remove the bead work, and add that to your bodice! Are those pants perfect, but the inseam is too long? You can hem pants, you know! Always remember to look at the parts, not the entire piece. Don’t forget to look at the accessories, as well. Leather belts can be trimmed down, and used as straps and accents. True story: The first time I spoke to a member of the Circle City Aerodrome was when I found a Nerf pistol that’s a popular sidearm for Steampunk cosplayers at Goodwill, and took an Instagram of it with some snarky (yeah, I admit) comment about painting it brown and putting some gears on it! So trust me, you want to look all over the stores when you visit, because you never know what you’re going to find.

Now, you have many parts, and your character is coming together, but do you have a good focal point? Do you have that piece that ties the room together, like the Dude’s rug? This is the one area where you might want to spend some money, if you can’t find anything during your thrift hunt. It’s not often you’re going to find a nice corset at Salvation Army, for example, so you might want to look online for one. Note: When shopping for a corset, make sure you’re going for one with steel boning, and not plastic boning, because that plastic is not going to hold up to the rigors of an immersion weekend. Speaking of rigors, also make sure that an event, like a convention or even an afternoon tea, is not the first time you’ve worn your creation. Wear it around the house a bit. Break it in, and make sure it doesn’t break on you!

This is just scratching the surface of some of the wonderful information they gave out. However, it is some of the solid information that works well for just about any one. For more information, they also gave some good resources. First, there is the costuming group, “And Sewing is Half the Battle“, who has helped run this in the past, and will be doing a similar seminar at Indiana Comic Con in March. Next, there is, of course, the Circle City Aerodrome, which has an active membership, and presence on social media as well. Another site I would like to point out, personally, is the Replica Prop Forum, or The RPF. This site is one of the internet’s longest running message boards dedicated to the replication of movie props and costumes, and is a wealth of information, if you’re willing to dig around. Finally, Belle has a great Steampunkery board over on Pinterest, where she puts interesting tidbits about Steampunk costuming!

Once again, I would like to give a huge thanks to Kat and Belle for putting on a fantastic presentation, and then putting up with me on the Book of Face as I’ve asked follow-up questions.

Good luck with your costume, be it Steampunk, or whatever you have come up with in your mind’s eye!
Tony