Around a month ago, I did a post stating that I was going to make a replica of the Resistance Pilot costume from The Force Awakens and The Last Jedi (LINK). At the time of writing, I had already started by purchasing a toy helmet, and tearing it apart to modify and make it a helmet I could actually wear. I also talked about some of the other items I’ve been looking at for the costume, and mentioned that this wasn’t something that was going to get done quickly, but I still had a goal for it. Since it had been over a month, and I know a lot of you aren’t friends with me on Facebook (no offense, that’s my “Me” page), I wanted to give you an update on what’s been happening for the last month.

First, the Black Series Poe helmet that shall no longer be a Poe helmet. Let’s face it, it’s been damp and cold, which means the Bondo takes a bit longer to set. Or, at least it does in my mind, so I’ll go down to the work space, apply the filler, then head back down in a few days to sand, shape, and apply more filler. I have one piece done to my satisfaction, and then last night I remembered some holes on the back of the helmet that needed filled, so those have had the first application taken care of, and I’ll start that process over again this weekend. In addition to the putty and filling work, I have received some 3D Printed pieces to help make the helmet look better, and I have hit the rubber pieces on the inside of the helmet with some PlastiDip, because I like the dark interior!

Moving on down, I also received a kit to make the chest box! This was ordered through a gentleman by the name of Roman Bela (LINK). This box is 3D printed, hollow (to allow electronics), and while I have yet to hit it with primer, it feels smoother than anything I could personally print out, so I find it money well spent! To go with the chest box, one of our local Rebel Legion members (Hi, Michael!) has put together light boards, to make these light up like the version in The Last Jedi. So, while the helmet will have more of a The Force Awakens flavor, the chest box will have light up pretty colors, and I’m okay with this. Finally, for this piece, the local group of pilots found some fantastic hose to go from the box to the flight suit (thanks, German Fetish sites! No, I’m not posting a link), and it just fits beautifully in the hole on the bottom of the chest box. I’m still waiting on acrylic buttons, and a metal back plate to attach the clip to, so I can put it on the best, but since I still need 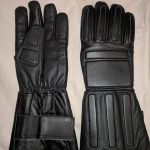 to primer, possibly fill spots, and then paint the box first, I’m not too worried on that.

One thing I just received last night was the gloves that go with the costume! These gloves are from an online maker called Wampa Wear (LINK) and is their Resistance Pilot Split Thumb Glove, in an Extra Large. Not trying to be funny here, friends, but these things fit like, well, a glove! They fit well, they are warm (which will be fun at conventions, where it’s already hot), they are fully lined which makes them so much more comfortable than my old X-Wing Pilot gloves, and they are well worth the money. Heck, I just noticed they have X-Wing Pilot gloves too, so I know who I’m going through in the future to upgrade my old leather flight gloves! While I’m all about supporting local, friends, I will recommend these, and I’m hoping they wear well, or else I’ll come in and edit this posting!

This is just what’s been received over the past month. In addition, I’ve also paid for the vest the chest box attaches to, and I’ve started paying for the flight suit and the leg flare holder. These are being made by a local craftsman! Do you all remember the last episode of the Indiana Geeking Podcast, featuring Phil of Spacey-Wacey Wear (LINK)? Yep, he’s the one that has my measurements, and is putting it all together for me! This is going to ensure it’s done right, and it’s accurate, and I know it’s going to fit! I am looking forward to seeing this really start coming together, and I’m hoping to have at least one of the pieces in time for next month’s update!

Speaking of “next month’s update”, that’ll probably come mid-month like this one did. Hopefully, by next month, I’ll have the chest box painted and assembled, and I’ll have the final paint scheme ready for the helmet, with the helmet all prepped and ready to be hit by rattle cans. In addition, I’m still looking for my size of boots for the pilot, I’m saving to buy the belt and harness material for the ejection harness, and I need the connector from the chest box hose to the flight suit. Will I have all of this by mid-April? Nah. I’ve got bills to pay. However, I will have some of it, and I will have the stuff I’ve worked on, so I’ll see you all next month, where I’ll also try to have a breakdown of not only the costume pieces I’ve purchased, but also the building materials I’ve had to buy, like spray paint, Bondo, chip brushes, and so on!

In the meantime, here are some more progress photos to enjoy!
See you next week!