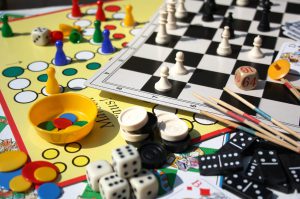 It feels so good to be back home in Kokomo for the summer. Finals are officially over, my friends are all in town or within driving distance, and I can relax. Well, not really, cause I just auditioned for “Big Fish the Musical” at Footlite Musicals (a local Indy theater I’ve written about before!), and if I get in to that, my summer will be BOOKED. Until then, I want to relax as much as possible. What better way for a Geek to relax than with some board games, good friends, and lots of pizza?

My first weekend back, my friend hosted a huge game night. We played some incredibly fun games, and I think now is a good time to boost some of my favorites! 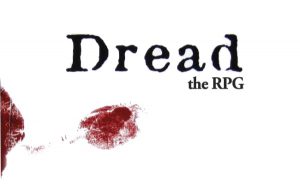 My first boost of the day is a strange little RPG system I recently discovered through an episode of Wil Wheaton’s Tabletop (a YouTube series I might write about at a later date) called Dread. In this game, a small group of players create average, unassuming human characters. These characters are then subjected to whatever horrors the GM thinks up, trying their best to stay alive in what is basically a horror movie scenario. The real kicker with Dread is that you don’t use dice: you use a Jenga tower. Anytime something dangerous happens to a character, or they attempt something dangerous, the player must pull from the tower. If the tower falls, there are extreme consequences. The tower adds an unbelievable amount of tension to the game, and really sets the mood for a good horror romp. This unconventional RPG system has quickly become a favorite of mine, and I hope to run some games over the course of the summer. You can find more information about the game, including how to purchase the source-book, through this link to the official website! 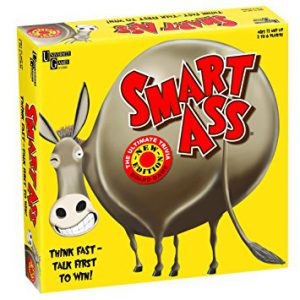 I am a huge sucker for trivia games, and I suck up useless info like a sponge. My second boost is a good ol’ competitive trivia game, one that I recently destroyed all of my friends at. In Smart A$$, you try to answer questions correctly to make it to the end first. On each turn, you role a die with three colors on its many sides: green, orange, and blue. These colors determine what kind of question you will be reading aloud to the group: green is a “who am I”, orange is a “where am I”, and blue is a “what am I”. The player whose turn it is reads a series of clues of the card they drew, and whoever blurts out the correct answer first then gets to roll a numbered die and move that many spaces. During the previously mentioned game night, my friends and I played a few rounds of this, but they eventually got sick of losing to my mad knowledge. This game is really fun for the whole family, and if trivia games are your thing, you can check it out here, on this Amazon Affiliate link! 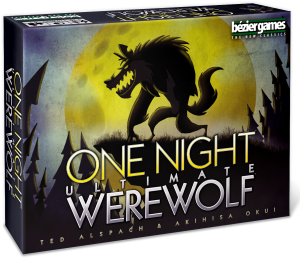 I wrap up this boosting session with the game that ended our game night: One Night Ultimate Werewolf, a brilliantly fun version of the classic party game Werewolf. For those who aren’t familiar with it, Werewolf is a game of deceit and trickery. Each player gets a card with a particular role on it, each role granting special skills and abilities to the player. Whoever has the Werewolf card attempts to kill of all the other players through a series of days, in which players choose someone to kill off in an attempt to kill the werewolf and save the village. One Night Ultimate Werewolf adds many new role cards to the game such as the Troublemaker, who gets to switch two random player cards while they aren’t looking. Instead of trying to weed out the werewolf over a series of a few nights, the players now only have one chance to discover and kill the werewolf. This game is an absolute blast; everyone tries frantically to discover the identity of the werewolf while convincing everyone else that they aren’t the wolf themselves. Of all the games played that night, we definitely played this one the most. If you’re ever in need of a good fun game to bust out at parties, this is the one for you. Find it at your friendly local game store, or through my Amazon Affiliate link here!

Well, that’s all I’ve got for you guys this week. Board games are a great way to spend time with friends, and I hope you all have some new ideas because of this post. Try out these games; they’re great!

Anyway, I will see you all next time!